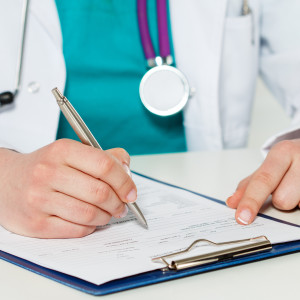 Two years after an eye-popping survey on U.S. doctors struggling to deal with growing administrative demands on health-care practitioners, a new study has more bad news: The paperwork burden is getting worse.

The Obama administration’s Health and Human Services Department, the federal agency charged with implementing much of 2010’s Affordable Care Act, in less than eight years has nearly doubled paperwork requirements imposed on the medical industry and its consumers, according to a report from the center-right American Action Forum.

HHS paperwork requirements amount to an estimated 700 million hours spent filling out forms each year — a regulatory burden second among federal agencies only to the Internal Revenue Service, said Sam Batkins, who authored the AAF report.

“Whenever we’re talking about forms, or paperwork or costs, we have to realize that someone has to bear those costs,” Batkins told InsideSources. “Oftentimes it’s painted as, ‘Oh, big corporations will bear those costs.’ Once that burden is on a particular company, whether small or large, either shareholders pay, or employees pay, through reduced wages or layoffs, or that burden can be passed on to consumers through higher prices or fewer services. And that’s often what we see with HHS.”

The AAF report is based on government-wide Information Collection Budgets compiled as part of the Paperwork Reduction Act of 1995. According to those ICBs, HHS in 2008 imposed roughly 412 million hours of paperwork. By 2016, hundreds of new ACA regulations helped push HHS’s paperwork burden to roughly 700 million hours. The next closest agency, the Securities and Exchange Commission, imposes 225 million hours.

“It shouldn’t be that surprising,” said Batkins, AAF’s director of regulatory policy. “When you fundamentally redo health care, and establish exchanges, and expand Medicaid and create a million different rules for tax credits and exemptions, there’s going to be some associated forms of paperwork with it.”

The AAF is part of the American Action Network, a think-tank started by Norm Coleman, a former Republican senator from Minnesota, and Fred Malek, a longtime Republican fundraiser and strategist. But nonpartisan analysts have also questioned the benefits of the president’s signature legislative achievement.

Just two months before the AAF report, a 22-page December analysis from the Congressional Budget Office concluded that Obamacare will cost the American economy the equivalent of 2 million jobs by 2025.

“The labor force is projected to be about 2 million full-time-equivalent workers smaller in 2025 under the ACA than it would have been otherwise,” according to the CBO study. “Three-quarters of that decline will occur because of health insurance expansions, which raise effective tax rates on earnings from labor.”

“Some people would choose to work fewer hours; others would leave the labor force entirely or remain unemployed for longer than they otherwise would,” according to the CBO, which crunches economic numbers for both parties in Congress.

The AAF and CBO reports come as the Affordable Care Act is again front-and-center in an election year, with Republican presidential candidates vowing on the campaign trail to gut Obamacare, and Democrats insisting the president’s namesake isn’t going anywhere without a fight.

Texas Sen. Ted Cruz promises to repeal the ACA completely, while GOP front-runner Donald Trump has said he will replace Obamacare with “something better.”

Even Democratic presidential front-runner Hillary Clinton has acknowledged the ACA needs to be streamlined.

“Part of the challenge is to clear away all the smoke and try to figure out what is working and what isn’t,” Clinton said days ago at a forum in Florida. “This is going to be challenging and I don’t think we should throw the baby out with the bath.”

The Obama administration has steadfastly brushed aside criticism of the ACA’s impact on the economy, repeatedly citing a record 72 straight months of private sector job gains.

House and Senate Republicans two months ago sent a long-promised repeal of most of the ACA to the White House, where the president promptly vetoed the bill. But House Speaker Paul Ryan, R-Wisc., has promised to have a replacement for Obamacare ready to go by the time a new president takes office next year.

“The idea that Obamacare is the law of the land for good is a myth,” the Wisconsin Republican said in January. “This law will collapse under its own weight, or it will be repealed.”

According to a 2014 study led by Harvard Medical School researchers, paperwork consumes about one-sixth of a typical American physician’s day — due largely to changes to U.S. health policy dictated by Obamacare.

The 2014 study, published in the International Journal of Health Services, predicted the trend would continue cutting into the time doctors spend with patients.