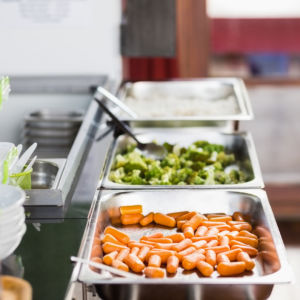 Education officials in West Virginia are weighing changes to school nutrition policies that would repeal tough state standards and replace them with the minimum federal requirements that are currently on the books. Some child-health advocates in the state have cautioned, however, that tying West Virginia’s nutrition policy to the federal government’s guidelines is risky, especially because there is currently also a push in Washington to loosen national nutrition standards for school meals. (Proponents of the changes to the national nutritional standards argue that the Obama administration had been overreaching on the issue for years.)

According to local media reports, West Virginia’s state Board of Education decided to open a 30-day comment period on a set of new nutritional guidelines for its schools. In addition to easing state policies on school breakfasts and lunches into line with federal regulations, the proposal would also remove restrictions on home-cooked foods brought in for special in-school celebrations. Currently, the state only allows students or teachers to bring in food for their classmates that is commercially packaged.

Furthermore, the new proposal would also prevent school officials from “naming and shaming” students with outstanding cafeteria debt in front of their peers. The proposal would require administrators to deal directly with parents. The issue has gained some national prominence amidst reports of students being called out in public for failing to pay off school lunch debt.

Chris Derico supervises child nutrition for the 2,700-student Lewis County School District in West Virginia. In an interview with InsideSources, Derico said that the state’s nutrition policy is overdue for an update. He also indicated that he and his students would like to have a little more flexibility when it comes to selecting certain food items.

West Virginia’s current school lunch policy is slightly different from federal guidelines, meaning that in many cases, school administrators are checking two sets of regulations before serving food to students. Derico also said that West Virginia’s nutritional guidelines are “too strenuous” and that they do not give districts enough of an opportunity to set their own plans and nutritional targets. In addition to strict rules on calorie limits and trans fats, West Virginia districts are also forbidden from selling food items a la carte—a practice that can sometimes complicate nutritional enforcement efforts in other states.

While the proposed changes in West Virginia are not expected to have a big immediate impact—possible policy changes at the federal level could eventually result in far fewer nutritional regulations for the state’s schools. U.S. Secretary of Agriculture, Sonny Perdue, already acted in May to roll back Obama-era regulations on sodium, milk fat, and whole grain content in school meals. Perdue argued that giving states more flexibility would allow schools to continue serving healthy meals that are also more appetizing to students. In Congress, Republicans have also introduced a number of bills that would limit the federal government’s role in regulating school lunch contents.

The fight for taste in school meals has been of particular significance for critics of the Obama administration’s stance on school nutrition, a cause championed by former First Lady Michelle Obama as part of a larger effort to combat childhood obesity. With the 2010 passage of the Healthy Hunger-Free Kids Act, children were obligated to take a serving of fruit or vegetables when buying school meals. The law resulted in a significant uptick in food waste, according to studies.

In West Virginia, Derico agreed that the Healthy Hunger-Free Kids Act did initially lead to more food waste in his cafeterias, though he did say that he agrees in principle with trying to get healthier options on school lunch trays. Derico said he has worked to include more fresh fruits and vegetables from local providers to stay in compliance with regulations while also providing appetizing options for students.

Derico said that he considers himself fortunate to work in state that puts a premium on childhood nutrition. West Virginia, which has struggled with higher than average rates of childhood obesity, provides financial support to school nutrition chiefs like Derico. Other officials in other states, however, have complained that a lack of state and federal support for nutritional compliance means that regulations have become unfunded mandates, forcing officials in some areas to choose between fresh but expensive locally-grown options and textbooks or teacher salaries.

Derico has said that, overall, his students have responded relatively well to the tighter parameters around which kinds of foods can be served, though there are a few areas where he thinks lawmakers would do well to ease restrictions. For example, whole-grain requirements have forced Derico to modify the types of pasta he uses to serve students, a change that has been unpopular in his district. Having a little extra flexibility to occasionally serve enriched pasta alongside whole grain bread would be a welcomed adjustment, he said.