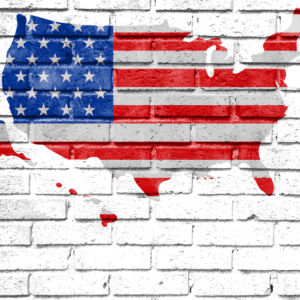 Oh, America, My Adopted Land, What Are You Doing to Your Special Self?

When I arrived on these shores in 1963, I wrote to a friend in London from New York, “We had America wrong. It is not a melting pot but rather a fruit salad. Spanish-speaking youths sell pizza on Broadway. Italian and German men drive taxis. All the doormen — they stand in front of the better blocks of flats — seem to be Irish. Black men and women do menial work: They are less obvious and not prospering.”

Those were the days when integrating the South was being bitterly fought and I, for one, thought that the soaring rhetoric of Martin Luther King could heal as well as inspire.

The most overt racism I saw in the North was not in New York or Washington but in Baltimore. At a bar beloved by the editorial staff of the Baltimore News American on Pratt Street, a major commercial thoroughfare at the time, an African-American man came in for a drink. The owner, a Polish-American, was on his feet in seconds, telling the man that the bar was in fact a private club, but he could sell him a bottle to go. The would-be patron took this clear lie quietly and left. My colleagues at the newspaper, including an African-American editor, were not interested in protesting the incident.

Race is probably baked into my consciousness, as I was born and raised in the British African colony of Southern Rhodesia. I grew up in a society in which some dreamed of a multi-racial future and others leaned toward white supremacy. In the end, after independence, Robert Mugabe made a mockery of democracy and civil rights for white and black citizens; his rule has been an equal opportunity horror.

When King was shot in 1968, Washington and Baltimore erupted in riots. I would not call them race riots, but they were riots of protest, of angry people who felt they had had enough. I walked through some of the worst rioting in Washington, and later drove through burning sections of Baltimore.

Rather than being threatened as a white man in black communities that were gripped with looting and fire-setting, there was an almost eerie politeness, a concern among the rioters for my safety. Richard Harwood, father of the CNBC correspondent, wrote about this, these manners, in The Washington Post.

It struck me then that the United States could survive even in its worst struggles if it could keep its manners, its sense of the other fellow’s well-being.

Nelson Mandela said that hate has to be learned. What he did not say, as far as I know, is that people love to hate. When hate is sanctioned, as it was in Nazi Germany or in endless Russian pogroms against the Jews, it becomes a creed and a way of seeing everything.

The election of Barack Obama not as an African-American but as the Democratic presidential candidate was a high point. It made me very proud to be an American, of having been accepted in an exemplary place. It told the world that the United States, for all of its history of slavery and prejudice, was an ascendant society; Ronald Reagan’s “shining city on a hill.”

In Dublin, I chastised an Irish journalist for criticizing a less-than-lovable newscaster as a “Protestant prick.” What had the man’s religion to do with it? In America, I said, we would not add religion to the epithet.

I was lunching with a Malaysian publisher at the National Press Club in Washington when he declared for all to hear, “The only straight thing about a Chinaman is his hair.” I was appalled and said so. We would not have said that, not in recent decades, because of the restraint of brotherhood, the sense of ascendance and the manners of a people from many places who live together.

Now an American president, Donald Trump, has whistled up tribalism, rationalized the unacceptable through false equivalence. And America, as an ascendant place, is in question, the delicate weave of its social fabric under stress.

John Donne, the metaphysical English poet, wrote nearly 400 years ago of “America” as hugely desirable place. He also warned, “No man is an island, entire of itself; every man is a piece of the continent, a part of the main.” Even more so in a diverse nation held together by the knowledge that any other course, any tribal hatred, diminishes the whole construct; or, to me, contaminates the fruit salad with rotten produce.