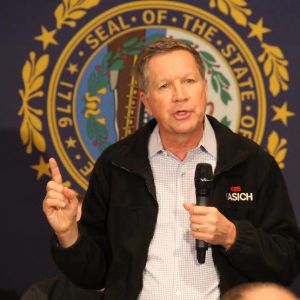 The governor campaigned through his much-touted 105 town hall meetings with optimism and talk of bipartisanship, saying he can win over “Reagan Democrats” and carry his party to victory in November.

But as Granite Staters began voting Tuesday, one top Ohio Democrat told InsideSources the central premises of Kasich’s campaign are false, and the “nice aw-shucks guy” who crisscrossed New Hampshire hasn’t in fact worked collaboratively with Democrats as governor in his state.

“It’s his way or no way,” said state Senate Minority Leader Joe Schiavoni, reached on his commute to Columbus. “It’s not true teamwork if you’re only on the team when you do what he says.”

Schiavoni rejected the idea of Kasich as a consensus builder, recalling how the governor once signed a bill Republicans hurried through the Senate to dramatically transform Youngstown’s school system. Schiavoni, who represents Youngstown, claimed he only heard about the plan a day ahead of time.

“That’s not team building or talking through issues,” the senator said. “These aren’t things that are discussions.”

As a result, he called his working relationship with Kasich “not particularly great.”

Schiavoni also dismissed the idea that a meaningful number of Democrats would vote for the governor in a general election for president. Asked about Kasich’s landslide re-election in 2014, he acknowledged that the governor won 86 of the state’s 88 counties, including heavily Democratic Cuyahoga. But Schiavoni echoed many political observers in attributing the governor’s victory largely to the weakness of the Democratic gubernatorial candidate, Ed FitzGerald.

FitzGerald was “a little known county executive with the weakest resume of a major party candidate in state history,” wrote Politico contributor Matt Mayer, president of the conservative group Opportunity Ohio, in 2014.

Mayer recalled how the Democratic hopeful “was caught by police in a car with a woman not his wife at 4 a.m. Then, we learned he was driving without a license and had been for nearly a decade.” Those weren’t even his only problems.

“By Labor Day, the election was over,” Schiavoni said. “[FitzGerald] wasn’t raising money. They didn’t have any debates. Democrats stayed home.”

In other words, the senator argued, Kasich “didn’t have a real race.”

A campaign against Democratic presidential candidates Hillary Clinton or Bernie Sanders would be quite different, with more scrutiny of a gubernatorial record that — Medicaid expansion notwithstanding — is quite conservative. And that’s assuming New Hampshire actually makes Kasich a real contender for the nomination.

There was one sign of hope for the governor Tuesday morning when he won the state’s storied Dixville Notch, the tiny hamlet that cast the first nine votes in the primary. His win came after he made his closing argument at a Monday town hall in Windham.

“I can tell you we’re going to win this election. My challenge is the primary,” Kasich said, appearing to acknowledge many Republicans who see him as too moderate.

“Look at the record,” he told the crowd. “You’ll find I don’t say one thing and do another.”

That much, Schiavoni agreed, is true of Kasich: “When he says he’s going to do something, he does it.”

The senator also gave the governor credit for his effort in New Hampshire. “He’s been flying our legislators, flying out every Republican in Ohio so he can do well,” Schiavoni said. “I respect the fact that he’s putting in the work.”