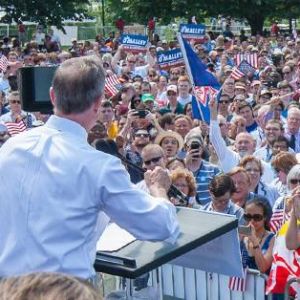 BALTIMORE — Former Maryland Gov. Martin O’Malley launched his longshot bid for the White House here Saturday, becoming the second Democrat to join the 2016 presidential race and campaign against Hillary Clinton from the left.

Four days after the entry of Vermont Sen. Bernie Sanders — an avowed socialist who also faces an uphill battle against the front-running Clinton — O’Malley kicked off his run in the heart of the city where he served seven years as mayor.

Rallying a crowd sweating under the hot sun in Federal Hill Park, the youthful 52-year-old pitched himself as a next-generation progressive with a national agenda that includes immigration and financial reforms, action on climate change and a push to “rebuild American cities as places of hope, opportunity and justice for all.”

In one of the most striking passages of his speech, O’Malley suggested that both Clinton and likely Republican candidate Jeb Bush are too cozy with corporate America.

“Recently, the CEO of Goldman Sachs let his employees know that he’d be just fine with either Bush or Clinton,” O’Malley said. “I bet he would! Well, I’ve got news for the bullies of Wall Street: the presidency is not a crown to be passed back and forth by you between two royal families.”

O’Malley also expressed disbelief that “not a single Wall Street CEO was convicted of a crime related to the 2008 economic meltdown.”

“Tell me how it is that you can get pulled over in this country for having a broken tail light, but if you wreck the nation’s economy you’re absolutely untouchable,” he said.

O’Malley’s announcement earned positive press from some political commentators, including an NBC News analysis calling him Clinton’s strongest Democratic rival and a Bloomberg piece praising a “smartly written speech powerfully delivered by one of the best orators in American politics.”

“I like the fact that [O’Malley] understands the importance of good urban policy,” said Deleon, whose extracurricular activities include serving as an elected neighborhood commissioner in the District. “As someone who’s invested in local government, it’s obviously something that’s really appealing to me.”

But not everyone at the park was as impressed. Several protestors heckled O’Malley from the crowd, saying his “zero-tolerance” policing policies fueled the distrust between black residents and law enforcement that was so evident following the recent death of Freddie Gray.

At one point, as O’Malley said, “Together we made our city a safer, healthier and better place for kids,” one man shouted, “No, you didn’t! Zero tolerance! Zero tolerance policies started this, O’Malley!”

Addressing last month’s riots only in general terms, O’Malley argued that “what took place here was not only about race, not only about policing in America. It was about everything it is supposed to mean to be an American.”

He said America can learn from Baltimore’s experience and added, “The scourge of hopelessness that happened to ignite here that evening transcends race. It transcends geography. Witness the record numbers of young, white kids killing themselves on heroin in suburbs and small towns across our country.”

Voters can expect conversations about these subjects to be a large part of the forthcoming campaign — especially because Clinton appears eager to engage her challengers.

“Looking forward to discussing strong families and communities,” she tweeted after welcoming O’Malley to the race Saturday.

For O’Malley supporter Anne Marie Healey, a longtime Democratic representative in the Maryland House of Delegates, the hope is for her former state government colleague to “challenge [Clinton] so she’s not too cautious and she will stand up for the things that we all believe in.”

Asked to assess O’Malley’s chances of winning the primary, Healey was candid.

“It’s a longshot, probably,” she said. “But nothing ventured, nothing gained, you know?”