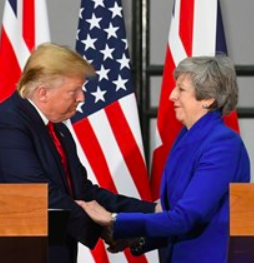 American conservatives hate it. Even the most passionate British conservatives support it. It was conceived by Winston Churchill as far back as 1908, mentioned again in 1924, and laid out as a plank for British reconstruction in his forward-looking “Plan for Postwar Britain” in 1943.

This toxic issue, which turns red blue and blue red when you cross the Atlantic, is Britain’s National Health Service (NHS).

Introduced in 1948 by the Labor government of Clement Atlee, it is often thought of in the United States as a socialist idea. Churchill was, in fact, influenced greatly by William Beveridge, a liberal economist who played a key role in the formation of what came to be known as the welfare state, which combined national insurance (social security) with national health insurance.

The Brits, I can attest as a former Brit, love the NHS. They also love to criticize it. It is up there with the weather.

Also, it should be noted, the NHS is not perfect; it is and always will be a work in progress.

So large a system has its failures. Whenever there is one, conservative American friends are quick to send me the bad news — as though a surgical mess-up in Birmingham was a harbinger of the collapse of the entire system.

The NHS has been described as the third rail of British politics.

Clearly, President Trump had never heard that and had the temerity to suggest that the NHS should be part of trade negotiations between the United States and Britain. No, a thousand times no, was the instant reaction of the conservative ministers and former ministers now jostling for election as prime minister.

Any suggestion that the NHS — Britain’s most popular government program — would be in any way subject to commercial interference would doom a British candidate for public office.

How it was that Trump thought he could grab the third rail and get away with it is unknown, but he walked that one back, as they say nowadays, quickly the next day.

Over the years, I have been asked innumerable times about how the Brits do things from public transport to creative theater; from the financing of the BBC to the hobby of racing pigeons. When it comes to the NHS I am never asked; I am told. Liberals tell me it is what we need in the United States: a single-payer system. Conservatives tell me that it is communism and that the Brits get terrible health care.

I am not sure the former is desirable, and I know the latter to be poppycock fed by a fury that is based on misinformation willingly received and willingly disseminated.

I have received care as a young man under the NHS and members of my family have been recipients through the years. I have spent long hours examining various health systems and a good deal of time taking to British doctors and professionals. I have also done the unlikely in this debate: talked to patients.

A dear relative was gravely ill a few years ago. I spent a week at her bedside in a large hospital in Kingston, just outside London. As she was sedated at the time, I had a lot of time to study the place.

It was big with wings specializing in everything from heart failure to eye surgery. It seemed to work pretty well, although the public wards were crowded.

But there were these takeaways: No one was refused, nor would be sent home early, and no surprise bill would come in the mail. My relative had a private health plan on top of the NHS standard and got a private room and good food.

Structural costs bring our bill up. All those women in your doctor’s office, arguing with insurance companies on the phone over “codes,” are not practicing medicine. They are engaged in a kind of health care roulette: Will they or will they not pay? Is it in the plan?

I am not sure the NHS is right for the United States, but structural overhaul is necessary. Wasted efforts and greed pervade the system.

By the way, I do not have a dog in this fight: I am on Medicare — and that costs the taxpayer too much because of weak controls.