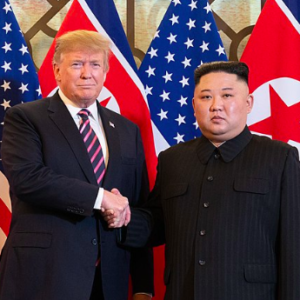 On North Korea, Trump’s Playing A Losing Game With His Critics

SEOUL — No matter what he does or says, Donald Trump is playing a losing game with his critics on North Korea — and probably on just about everything else.

If he had joined Kim Jong-un in signing a piece of paper agreeing to give up sanctions while Kim promised to shut down the main nuclear complex at Yongbyon, a chorus of Trump-haters would have hissed and booed. Those same people, of course, blamed him for “failure” when he rejected Kim’s phony offer, shook hands and walked out at the Metropole Hotel in Hanoi.

Aside from hard-core columnists and panelists and pundits who make a living blasting Trump from their perches on editorial pages and TV shows, a slew of experts, scholars and retired diplomats also joined in the fun. Some of them hate Trump less than others. A few are quite measured in their criticism.

The overwhelming sense from all of them is that Trump doesn’t know what he’s doing, should have done his homework, known what to expect and been more astute in debating the fine points of a deal. Some, notably former White House officials, say he would have benefited from more advance work by staffers who would have finessed the finer points after weeks or maybe months of “preparation.”

But didn’t Sung Kim, once the State Department envoy on North Korea and now the U.S. ambassador to the Philippines, spend hours and hours with Choe Sun-hui, North Korea’s vice foreign minister, before Trump met Kim in Singapore last June? Sung Kim knows the ins and outs of this game as well as anybody. He got nowhere with Choe. That’s why the paper that Trump and Kim Jong-un signed in Singapore contained the empty promise of “complete denuclearization,” which might sound pretty definitive but meant nothing.

The newly appointed U.S. envoy on North Korea, Stephen Biegun, retired vice president for international affairs at Ford, would appear inexperienced for such a high-profile role but does have a background with the national security council. He also served as foreign policy adviser to Sarah Palin when she was governor of Alaska and John McCain’s vice presidential running mate in 2008. Thus he was in a position to tell her which different countries were the good guys and have her say on TV, “You can actually see Russia from land here in Alaska” – a line later satirized as, “You can see Russia from my house.”

In fact, Biegun could have done no better or no worse than Sung Kim for one basic reason: Whatever either of them said, Kim Jong-un was not and is not about to relent on his precious nuclear program. Just this week, the silliness of his offer to “close” the Yongbyon complex became clear when South Korean intelligence analysts said the North Koreans haven’t been using it for fabricating warheads since last year. Instead, they make them from highly enriched uranium at sites elsewhere. Kim’s refusal to shut down those sites torpedoed the summit. No wonder he was willing to close Yongbyon.

At the International Media Centre in Hanoi, we sensed the bust-up of the summit as Trump and Kim shook hands well before the game was to have ended. About an hour later, when he and Kim were to have had a farewell lunch, the president held forth at the American team’s headquarters at the J.W. Marriott. That was a 40-minute ride through swarms of motorcycles from the media center where I was glued to a wide-screen TV along with hundreds of others. We already knew there would be no “Hanoi Declaration” – an immense relief since any such statement would only show the vacuity of the performance.

Much to his annoyance, Trump was upstaged hours earlier by convicted attorney Michael Cohen’s testimony before a congressional committee in Washington. I saw the back-and-forth live on CNN and BBC in my hotel room. Presumably, Trump was watching too. There was Cohen denouncing his former client as a “con man.” You had to wonder if the president’s walkout was all in some con game.

The outcome was anti-climactic, a one-day story. Too bad for the Trump-haters, who would have loved analyzing a final statement as evidence he’d been conned. Sadly, they had to settle for bashing Trump for his “failure” to get anything. Actually, as Cohen had wanted, he had bigger things to worry about as he left for “wonderful Washington DC” – his final words before walking out of the press conference.