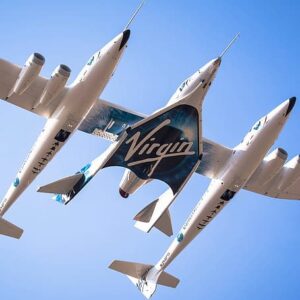 It wasn’t an especially sunny day last Sunday but, in my home, there was light aplenty and lightness, too.

The joy came not from the normal charges and countercharges on Sunday morning television. Instead, it was the flight into near space of Richard Branson, the show-off billionaire tycoon, aboard his own Virgin Galactic spaceship.

It was thrilling and yet, in terms of space flight, it was old hat. Not much happened there. But it was “a great get” and it aired on many news channels.

In talk show parlance a “get” is a hard-to-secure guest, and a “great get” is someone much sought after, like a political figure in controversial circumstances or simply a celebrity in convoluted love trouble.

The Branson show on Sunday was, to my mind, a “great get.”

I would submit that what made the highly televised event so compelling wasn’t that we saw Branson, swashbuckling business adventurer and balloon pilot, go weightless for a few minutes, but that we saw what engineering genius, which is well-funded, can do.

The back story is instructive, too. It is that in an ideal situation, the government pioneers a technology but private industry exploits and brings it to good fruition. Space technology has belonged to government, but it is booming now that the entrepreneurs have taken it up. It is technology transfer working. It is what has driven the continuing technological revolution.

Sure, Branson’s flight was an advertisement for himself, a show mounted by a P.T. Barnum-like impresario. That doesn’t mean it wasn’t something of a tonic for the world, so beset by negative news. It was thrilling, transcendental, and a shared adventure.

Branson made his first fortune selling record albums by mail order and then in Virgin record shops: Linda Gasparello, the journalist and my wife, says Branson went from rock to rocket. The name Virgin, now often associated with about 400 companies which he controls, dates back to that early period when an employee said that Branson and his staff were virgins in business. He liked it and it stuck, and he is virginal no more.

Branson’s great triumph may have been his battle with British Airways to establish Virgin Atlantic Airways. British Airways left no dirty trick untried to hobble the startup, but Branson weaponized public sentiment to win the day. I have a handwritten letter from Branson telling me that although he would love to attend a conference I was organizing, he was too busy doing deals to come. Writing a personal letter said something about the man.

The passengers-in-space race is enhanced by the fun narrative that there are three billionaires — Branson, Jeff Bezos of Amazon, and Elon Musk of Tesla — competing to commercialize space travel. Bezos is planning to lift off in his personally funded spacecraft on July 20. Musk — who is furthest ahead in the commercialization of space, of which passenger flight will be only a part — changed the storyline breakfasting with Branson before his flight. (I wouldn’t want to eat before such a flight. Strapped into his seat, I thought Branson looked a little green but dry.)

As a former private pilot, I have always thought there is a spiritual dimension to flight, any kind of flight, in that it has been the dream of humans — since Homo erectus first set eyes on birds — to fly. We, the favored, live in a time when not only can we fly, but we can also go into space or watch others go there.

To me, the great moment Sunday was the mothership letting the space plane go and the powering up of its jet. This was demanding, dangerous, and invigorating.

The star flying across the sky was neither Branson nor his money but superb, brilliant engineering, buttressed by the great designs of men like Burt Rutan whose talent is everywhere on display in advanced aircraft.

Aviation has its own de facto hymn. It is “High Flight” by the British-American Spitfire pilot John Gillespie Magee, who joined the Royal Canadian Air Force because the United States hasn’t yet entered the war, and who was killed in a mid-air collision over Britain in 1941. The poem begins, “Oh! I have slipped the surly bonds of Earth/And danced the skies on laughter-silvered wings” and it ends with these lines, “And, while with silent, lifting mind I’ve trod/The high untrespassed sanctity of space./Put out my hand and touched the face of God.”

Thanks to Richard Branson, space traveler, I slipped the surly bonds of political talk last Sunday morning and soared.