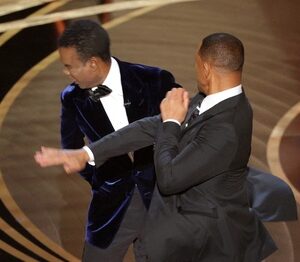 On The Scene From the Slap Seen ‘Round the World

Hollywood’s diversity was being rightfully celebrated at Sunday night’s 94th Academy Awards ceremony … until the slap seen around the world changed everything. I know, because I was there.

Actor Will Smith left his seat in the audience and walked on stage and — with the world watching — slapped comic Chris Rock. Smith said he was upset about a joke Rock made about Smith’s wife, actress Jada Pinkett Smith. Suddenly, that act of violence took oxygen away from many hardworking industry professionals.

Smith’s slap stole headlines from a banner year for minorities and diverse films. “CODA” — with a primarily deaf cast — won Best Picture. Jane Campion was the third woman to win Best Director for the western psychological drama “The Power of the Dog.” And Smith — 20 minutes after the infamous slap — won Best Actor for his role in “King Richard.”

But it was The Slap that everyone talked about afterward.

At the red carpet, I captured reactions that ranged from defending Smith to condemning his outbursts to suggesting the slap was staged.

The mood at after-parties, however, was more serious. For many members of the industry in the diverse crowd, this was finally their moment to shine. And they were outshone by Smith.

Actor Jabari Banks, who is playing Smith’s role in the reboot of “Fresh Prince of Bel Air,”  told me he had “mixed feelings” about Will’s behavior. “Coming from a military family, the rules are to leave women and children out of it. Violence is never the answer for anything, but Will was standing up for his wife and that anger came from a godly place.”

Former NFL quarterback Ed Blount expressed disappointment at Smith’s actions. “Black people complained about not getting a seat at the table for years, and when we finally do, Will Smith does this and sets us back. Chris Rock was such a class act handling things the way he did.”

Blount said he thinks the move was not wise for either Smith or the greater Black community.

The plan for the show was to honor the achievements of minority filmmakers and movie industry elites such as Phylicia Rashad, Cheech Marin, Cedric The Entertainer, and Renee Lawless.

Some in the audience were there to spotlight their philanthropic causes. For Sabrina Lewis, Miss California USA 2021, that meant equestrian therapy. “I have been a competitive equestrian pretty much my entire life. So right now I volunteer with Best Buddies, which is an organization for people with disabilities.”

Also there was Autumn Rae, Miss Black California USA. “I really want to be a change in my community. … There are a lot of underprivileged children. I was a child who didn’t have the resources to have dance lessons or singing lessons or anything like that. And music is a way that you can express yourself. So when you have an outlet, it really does make a world of a difference.”

Kevin Kreider, star of “Bling Empire,” spoke about the breakthrough of Asian-majority cast productions. “Well, it’s really about diversity, which is amazing. I’m used to normally celebrating just within the Asian community. So the fact that I can break out of that sandbox and celebrate with other communities and play with other people and other sandboxes is amazing, I love that.”

Renee Lawless from “The Haves and Have Nots” said, “I know that it’s kind of cliche, but I just don’t understand how I got in this beautiful group of people that I truly admire. So I feel proud and clearly they’ve included me. I’m a white chocolate, so I guess I am a person of color. I think inclusivity is definitely needed.”

Speaking of Hollywood diversity, Cheech Marin said, “Everything should change after tonight. I’ve been waiting for this all my life.”

Marc Ang is a community organizer in Southern California and the founder of Asian Industry B2B. He wrote this for InsideSources.com.