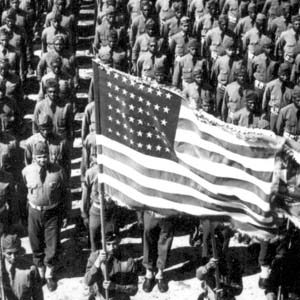 On Victory in Europe Day, Honor Those Who Served

With the summer months quickly approaching, many Americans look forward to vacations, time off from school and longer days of sunlight. Additionally, we observe important “holidays” on the calendar to honor our country’s military heritage and veterans, including Memorial Day  and Independence Day.

However, there is an important anniversary that is often overlooked in the United States, but should be recognized as a pivotal mark that changed the trajectory of this country.

May 8 is the 74th anniversary of the allied forces’ victory in the Atlantic and the end of World War II in Europe. It is commonly known as Victory in Europe Day, or V-E Day. On this day in 1945, the Allies of World War II accepted Nazi Germany’s unconditional surrender. Celebrations erupted throughout the Western world, including many U.S. cities, to mark the end of the European part of World War II. President Harry Truman dedicated the victory to the memory of Franklin D. Roosevelt, who died less than one month earlier.

The everyday men and women of the World War II generation’s character, courage, creativity, determination and innovation not only led to V-E Day, but also reshaped America. We should continue to look to the Greatest Generation for the spirit, sacrifice and commitment of the American people to the common defense of the nation and to the broader causes of peace and freedom from tyranny throughout the world.

Winston Churchill once said “succeeding generations must not be allowed to forget their sacrifice and to live by the honor they represented.”

For those “citizen soldiers” who left home at 17, 18 and 19 years old for the war, the way we can honor them is through a spirit of evangelism to assure our schools and universities do not forget their obligation to teach the history of our republic, and in particular, what our citizens have done in its wars, especially World War II. Remembering, honoring, recognizing and thanking the World War II generation who — through sacrifice, valor, dedication and determination — preserved our freedom, saved our nation and literally saved the world should be important reminders for all of us during these summer months and beyond.

On this day, we remember those lost during the war and we look to the criteria assigned for the design competition for the World War II Memorial by the American Battle Monuments Commission that reads: “Above all, the Memorial stands as an important symbol of American national unity, a timeless reminder of the moral strength and awesome power that can flow when a free people are at once united and bonded together in a common and just cause.”

As the Greatest Generation fades, its members should look back on a grateful and proud country. We can and will continue to honor them at “their” memorial in Washington, but we should also unite through a shared purpose at the community level. It’s the least we could do for all their sacrifice.