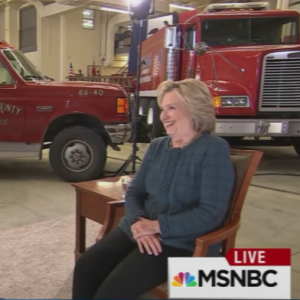 Back in 2007 and 2008, Chris Matthews’ relationship with Hillary Clinton was rocky to say the least.

The “Hardball” host was in the early throws of his on-air love affair with Barack Obama, and he made a series of sexist comments about the then-New York senator (Clinton looked “witchy,” he once said) as she ran against the future president in the Democratic primary. Clinton was a good sport publicly, joking that the MSNBC commentator was just one of the “men who are obsessed with me.”

But not everyone on the left was laughing. Matthews’ remarks angered some of his fans, and on the night of the New Hampshire primary — the first time Clinton would best Obama in their protracted campaign — the host was called out by a rising star on his own network: a 35-year-old radio host named Rachel Maddow.

“You want to know who they’re blaming for women voters breaking for Hillary Clinton over Barack Obama?” Maddow asked. “They’re blaming Chris Matthews! People are citing specifically Chris … not only for his own views but also as a symbol of what the mainstream media has done to Hillary Clinton.”

Since that night almost eight years ago, there has been a notable shift in Matthews’ approach to the one-time Obama rival who went on to become the president’s secretary of state, loyal ally and likely successor as party standard-bearer.

On Tuesday night, Clinton sat for her first “Hardball” interview since 2002, and the host seemed determined to mend fences. He lobbed softballs about how she decided to run for Senate — “New York came and fell in love with you and said, ‘We like you, come up here, live up here and be our senator'” — and whether it’s “important culturally” for the United States to have women in military combat.

Before praising Clinton’s resilience after the Monica Lewinsky scandal, Matthews stated his intentions explicitly. “I want to say something nice about you,” he said, adding a possible allusion to his past behavior: “I have to. I was personally responsible.”

Even the one part of the exchange some news outlets deemed confrontational, Clinton’s refusal to answer Matthews’ query about the difference between a Democrat and a socialist, wasn’t particularly tough. It’s true the presidential candidate dodged the question, but she got away with it in part because Matthews, true to form, kept talking over her.

The only significant takeaway from the conversation is that the host and the candidate seem finally to have made up. At the end of the interview, Matthews said, “I’ve been telling people for years that when they’re with you personally, you’re very different, you’re very easy to talk to. I think watching you the last 20 minutes they get the point.”

For her part, Clinton paid the pundit the ultimate compliment by praising his book, “Tip and the Gipper: When Politics Worked,” as “a perfect example” of how to force bipartisan compromise.

All of this indicates that Matthews will be a bigger booster of Clinton this time around. Plus, as NewsBusters pointed out, the host is probably hoping to have her stumping for his wife, a Democrat running for Congress in Maryland this year.