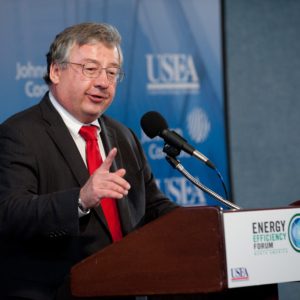 One Man Has Reinvented Foreign Aid

He is an unlikely person to have reinvented foreign aid. But, in his way, that is what Barry Worthington has done. He is the executive director of the U.S. Energy Association, and he has brought hope to troubled energy companies around the globe, first in Eastern Europe and now in Africa, South Asia and Latin America.

Thirty-one years ago, when Worthington came to Washington to assume the role of USEA executive director, he was young and had not traveled widely. Now he is perhaps the most traveled man I know. A member of his staff says, “He is the globe-trottingest.”

Worthington makes at least 30 trips a year — most are overseas. He has been known to fly to a distant capital, say Beijing, hold a meeting and fly back the same day.

But Washington influence and globalism were not on the horizon when Worthington, his bride, Louise, and young son Barry, now an award-winning filmmaker, (daughter Kelly was yet to arrive) first moved to Washington.

This most-American of men, educated at Penn State and the University of Houston, looked for a career in the electric utility industry, where he was hired as a junior executive by Houston Lighting and Power. He had embarked on a quintessentially American career.

Then he was offered a job at the nonprofit Thomas and Alva Edison Foundation. “I took it because it was twice the pay and we were young and broke,” he told me.

The foundation was foundering, and he accepted an offer to head USEA. It was not, on the face of it, an auspicious move.

USEA, the U.S. branch of the World Energy Council, was in dire straits itself. It had made good money on the World Energy Conference, held in Detroit in 1974. But USEA, supported by a modest dues structure, was headed for oblivion when that conference money was exhausted. In fact, the association was down to Worthington and a secretary.

“It had expenses of $250,000 and revenues of $200,000,” Worthington told me over lunch at the National Press Club in Washington. Last year its revenues were $9.4 million, and membership dues account for only 3 percent. “It was our best year yet,” he said.

USEA does not lobby and supports all fuels as an information source and a clearinghouse, and a place where diverse energy interests meet. It runs five major conferences a year and 40 informational briefings.

Worthington looked for new revenue sources, and the unlikely saviour he found was the U.S. Agency for International Development.

When the Soviet Union collapsed, the United States wanted to help the former Soviet satellites. But the usual aid, handed out for bridges and roads, did not fit the situation. Expertise was required, very specialized expertise, and Worthington’s members had it, particularly in the electric field.

The ticket, the Worthington solution, was to pair American utilities with Eastern European ones and show them “best practices.” The first challenge Worthington said was to get them off power at 48.6 cycles and to boost their output to the European standard.

“Frankly, it was an ethnicity play,” Worthington said.

He explained that he was able to find U.S. companies who had engineers who were either from the Eastern European countries or were first-generation Americans. Houston Lighting and Power, for example, had not one but two émigré senior engineers from Czechoslovakia, now the Czech Republic.

The cost to the U.S. companies is minor and the sense of helping and being part of history is major. USEA costs — management and out-of-pocket — are borne by USAID. To the agency that is a pittance to pay for an incontrovertible success.

These partnerships have been an eye-opener to all involved in foreign aid and the idea is spreading. Latest to seek help from Worthington and his 25-person team is the U.S. Department of Energy, realizing it is better to give away skill than money. Skill sticks, money evaporates. The proof of that is the Worthington formula, still spreading useful skills in everything from dispatching electricity to designing rates.

In a town of strivers, Worthington plays in a mellow tone. He dresses modestly, makes conversational speeches and, in my experience, ruffles no one. An unpretentious man who wanted to work in an electric company has left his footprint on the world — USEA has executed more than 80 partnerships.