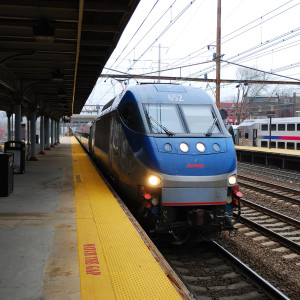 There’s No Such Thing as a Free Train

Twenty billion dollars is a lot to pay for a hole in the ground.

That’s the current cost estimate for the Gateway Project, an Amtrak-led endeavor to build new railway tunnels underneath the Hudson River. They’ll help connect some of the largest cities and economic centers in the United States—from Boston through New York to Washington, D.C. The new tunnels will supplement tunnels originally built by the Pennsylvania Railroad over a century ago, which badly need rehabilitation. So, to be fair, it’s a very important hole. The problem is that Amtrak, New Jersey, and New York want the rest of America to pay for it.

This doesn’t seem quite right, given that adding a toll to railway passengers to fund building the new tunnels would, by my calculations, only add $3.60 to the cost of a trip. The problem, at its heart, reflects a key concept from public choice economics: the political logic of concentrated benefits vs. dispersed costs. This means that there is a tendency for special interest groups to lobby for publicly funded programs that only benefit a few people, but they have to be paid for by everyone else.

For example, it’s in the best interest of political figures like New Jersey Governor Chris Christie, New York Governor Andrew Cuomo, and U.S. Senators Chuck Schumer (D-N.Y.), Cory Booker (D-N.J.), and Robert Menendez (D-N.J.), to advocate for Congress to provide grants to fund the Gateway Project, since it represents a free ride for residents in their states that is paid for by every other American. No one wants to see their cost of transportation rise—and politicians especially don’t want to upset voters—so if there’s a way to pass costs along to other people, there’s definitely an incentive for them to do so.

Amtrak, NJ Transit, The New York Times, and politicians have trumpeted the economic value of these proposed tunnels and forecast imminent doom if they aren’t built. Sen. Schumer declared that recent problems with the aging tunnels represent a “soul-chilling premonition of our future” and that we face a “regional transportation Armageddon.” World-ending struggles between good and evil aside, it would be helpful to understand how Amtrak’s Hudson River tunnels factor into the larger picture.

This is not to say that these tunnels aren’t important, however. They desperately need renovation, and to do so without new tunnels to replace them in the meantime would cause major congestion. Even so, since Amtrak’s trains represent less than a quarter of the usage of the tunnels—NJ Transit uses the lion’s share of tunnels’ transport capacity—the potential congestion problems would not be experienced by Amtrak riders, but rather by New Jersey residents commuting into New York.

That said, it’s not just New Jersey commuters who would benefit from the new tunnels. The precursor proposal to the Gateway Project, the ARC project, was cancelled in mid-construction by Gov. Christie in 2010 because he feared New Jersey would have to bear the cost overruns. But the Regional Plan Association—New York’s urban research and advocacy organization—found that the ARC project would have raised property values in New Jersey by $18 billion due to the reduced travel time that New Jersey residents would enjoy. New Jersey municipalities would then stand to gain an extra $375 million in property taxes each year.

In short, the main beneficiaries of the Gateway Project will be New Jersey residents. Their politicians shouldn’t demand that the rest of America pays for their commuting costs. Effective public policy should emphasize a “user-pays” system wherever possible because, to paraphrase Nobel laureate Milton Friedman, “There’s no such thing as a free train.”