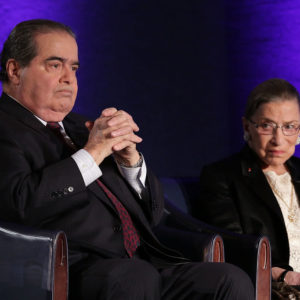 Amid the discord, there can be peace. History has taught us so.

In the NFL, two proud players — Gale Sayers and Brian Piccolo — taught us in black and white.

In the U.S. Supreme Court, two opposing justices — Antonin Scalia and Ruth Bader Ginsburg — reminded us in male and female.

Scalia and Ginsburg were polar opposites, both in size and personality. Scalia was beefy and boisterous to Ginsburg’s slight and studious.

But the conservative-thinking Scalia and the liberal-leaning Ginsburg formed a common bond. An improbable one that took them from operatic productions at the Kennedy Center to elephant riding in India.

Scalia captured their relationship succinctly in 2015, “Call us the odd couple. She likes opera, and she’s a very nice person. What’s not to like? Except her views on the law.”

Ginsburg once said of Scalia, “I disagreed with most of what he said, but I loved the way he said it.”

Learning to disagree without being disagreeable — with a touch of humor.

In 1967, NFL running backs Sayers and Piccolo roomed together on the road, a rarity for black and white players at that time. Piccolo initially viewed Sayers as too quiet and stand-offish, while Sayers saw Piccolo as an annoying jokester and wise-guy.

But the two Chicago Bears bonded over health.

In 1968, amid much racial turmoil in the United States — from the assassination of Dr. Martin Luther King Jr. to mass riots — Piccolo supported Sayers as the latter rehabilitated from debilitating knee issues; in 1969, Sayers tried to comfort Piccolo when he was diagnosed with testicular cancer.

But Piccolo died in 1970 at age 26. Sayers, a dazzling player who became a Hall of Famer, died five days after Ginsburg last month, at 77.

At the Bears’ team banquet in 1970, Sayers spoke of Piccolo: “I love Brian Piccolo, and I’d like all of you to love him, too. Tonight, when you hit your knees, please ask God to love him.”

Scalia and Ginsburg competed against each other on the nation’s Supreme bench; Piccolo was vying to make the Bears’ main roster, which meant replacing Sayers at times.

All four proved competition can exist without hate.

These days, we are in the throes of serious political rancor, much of it centered around the White House, more so now that Donald Trump and First Lady Melania Trump have tested positive for the coronavirus.

Yes, Trump has a history of not knowing the meaning of words such as humility and magnanimity (witness Trump’s Sunday joyride around Walter Reed National Military Medical Center).

But his opposition can be just as foul.

Simply check the venomous side of social media before the various platforms began monitoring pro-death postings.

—    Also, there is this one apparently from Zara Rahim, a former spokesperson for Hillary Clinton during Election Year 2016, before she deleted the post: “It’s been against my moral identity to tweet this for the last four years, but I hope he dies . . .  I feel free.”

Words of advice: Don’t become what you are fighting against.

Outside of Washington, Kentucky state Attorney General Daniel Cameron is viewed by many in the black community as the utmost unfriendly competition because of his highly publicized news conference in September.

When the grand jury in the Breonna Taylor debacle didn’t indict three police officers for murder and two of them weren’t charged at all, Cameron was a marked man because he was expected to hammer policing. Regardless, this situation is a sad display of intra-racial vitriol in which vicious name-calling has dominated volatile Louisville.

In fact, black activist Tamika Mallory, at a subsequent news conference, vociferously accused Cameron of this atrocity: “Daniel Cameron is no different than the sellout negroes that sold our people into slavery.”

There was a time (not that long ago) when even the bitterest of rivals could show commiseration and civility in unison.

One such instance was recounted by Chris Matthews, formerly the host of “Hardball” on MSNBC and an aide to Tip O’Neill in the 1980s, in his 2013 book, “Tip and the Gipper: When Politics Worked.”

The book focused on two political adversaries who formed a political partnership: O’Neill, the tough Democratic-bargaining speaker of the house, and President Ronald Reagan, the staunch anti-big government Republican president.

In Matthews’ book, former Reagan aide Max Friedersdorf recounted a scene from George Washington University Hospital following the assassination attempt on Reagan on March 30, 1981. O’Neill was one of the first people Reagan let visit him at GW. O’Neill clutched both of Reagan’s hands, then said, “God bless you, Mr. President.”

A woozy Reagan brightened up upon seeing O’Neill, saying, “Thanks for coming, Tip.” Then, O’Neill knelt by Reagan’s hospital bed so the two could pray together. Tip chose the 23rd Psalm.

Matthews told “Politico” seven years ago: “If that doesn’t grab you, you’re not a human being. That stuff still gets to me.”

The same can be said of the timeless movie, “Brian’s Song,” released in 1971 and a classic tear-jerker chronicling the Piccolo-Sayers association.

On the judicial side, librettist Derrick Wang produced the comedy opera “Scalia/Ginsburg,” which was inspired by the opinions of the two justices — and their friendship. As Secretary of Labor Eugene Scalia often said of his dad: “My father believed in hearing out those with differing political views.”

It is publicized with this description: We are different. We are one.