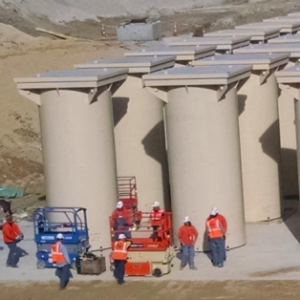 “Furthermore, the absence of a permanent high-level radioactive waste repository creates even higher levels of risk and uncertainty around any proposed interim storage site,” the governor wrote.

Holtec International and the Eddy-Lea Energy Alliance have proposed building a temporary facility near New Mexico’s Eddy-Lea county line, to store SNF rods until a permanent repository is built. The alliance is a consortium of the two southeastern counties and the cities of Carlsbad and Hobbs. Carlsbad, the Eddy County seat, is home to the Carlsbad Caverns National Park.

The company has the full support of Eddy and Lea County officials, who say the project would have economic benefits for the region. Holtec officials and their supporters say the facility would create about 100 temporary construction jobs and 100 permanent positions. They also say the areas would receive an inducement payment to be shared with the state. The NRC is currently considering a 40-year operating license for the facility.

Lujan Grisham joins industry and environmental groups, who are concerned that “temporary” might become permanent. There currently aren’t any permanent commercial high-level nuclear waste sites in the U.S.

Since the 1980s, the Nevada congressional delegation has successfully thwarted federal government plans to place a permanent site at hollowed-out Yucca Mountain. The House of Representatives is once again considering the issue as part of an appropriations bill, but there continues to be significant opposition to its passing.

Lujan Grisham also noted that New Mexicans look to Eddy and Lea counties “as a driver of economic growth in our state.”

“Establishing an interim storage facility in this region would be economic malpractice,” she noted.

The two counties are among the top oil-producing counties in the U.S., and Eddy County is home to Carlsbad Caverns National Park, which has about half a million visitors each year.  The proposed site is also about 12 miles north of the federal Waste Isolation Pilot Plant — the world’s only functioning deep geologic nuclear waste storage area.

Under the proposal, the facility would initially store up to 500 canisters and 8,680 metric tons of high-level and low-level commercial nuclear waste. The site could potentially store more than 100,000 metric tons of waste with a license renewal after 40 years.

“Any disruption of agricultural or oil and gas activities as a result of a perceived or actual incident would be catastrophic to New Mexico, and any steps toward siting such a project could cause a decrease in investment in two of our state’s biggest industries,” she wrote.

Lujan Grisham also said that transporting SNF on the nation’s crumbling infrastructure through highly populated areas could place a financial burden on the state — and could be dangerous.

“Transporting material of this nature requires both well-maintained infrastructure and highly specialized emergency response equipment and personnel that can respond to an incident at the facility or on transit routes,” Lujan Grisham said in her letter. “The state of New Mexico cannot be expected to support these activities.”

Holtec has defended its plans, citing the federal government’s inability to find a permanent resolution for dealing with the tons of waste building up at nuclear power plants.

Kevin Kamps, radioactive waste specialist at Beyond Nuclear, a nonprofit group that has been one of the leaders in the fight against the site, said environmental groups have partnered with oil and gas companies and agricultural businesspeople — who are in opposition to the Holtec proposal — “because you can’t have economic activity in a radioactive dead zone.”

“Our major concern is that it could become de facto permanent surface storage,” Kamps told Inside Sources. “There is no guarantee that Yucca Mountain will ever open. So New Mexico could be stuck with this waste forever.”

Both Kamps and the governor said since there is no permanent site, over time it is likely the casks holding SNF will lose integrity and require repackaging.

“Any repackaging of SNF and high-level wastes increase the risk of accidents and radiological health risks” the governor wrote. “Again, New Mexicans should not have to tolerate this risk.

“Given the potential for adverse impacts to public health, the environment and our economy, I cannot support the interim storage of SNF or high-level waste in New Mexico.”