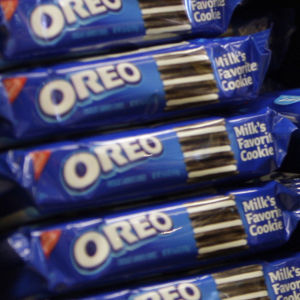 In the latest of many firsts in this presidential election, Donald Trump, Hillary Clinton and Bernie Sanders are now united in their populist anger — at Oreo cookies.

Oreo-maker Nabisco is under fire from the presumptive Republican presidential nominee, the Democratic front-runner and a top Sanders surrogate, all of whom have recently attacked the company’s plan to send hundreds of American jobs to Mexico.

The worst assault yet came Sunday, which, in a terrible twist of fate for “America’s Favorite Cookie,” happened to be National Oreo Day, when Clinton called out Nabisco in the middle of a nationally televised debate.

The backstory of the confectionery conflict began last summer, when the snack manufacturer, which also makes Chips Ahoy!, Ritz Crackers, Triscuits and Wheat Thins as part of the global Mondelēz International corporation, announced it was laying off 600 employees at its Chicago factory and investing over $130 million in its Salinas, Mexico, plant.

Mondelēz reported the changes would save $46 million annually, noting that at least 300 Chicago layoffs would have occurred even if the money had gone to Illinois.

But in an era of economic anxiety, leading White House hopefuls are casting Nabisco as an outsourcing villain — just another greedy corporation putting the screws to American workers.

The unconventional billionaire — ironically, a former pitchman for the cookie — owned Oreos as a campaign issue for more than half a year, until Sanders’ head of labor outreach weighed in last Wednesday.

At a rally outside the Chicago factory, Sanders backer Larry Cohen called the layoffs an “all-too-typical story about greed.” The former Communications Workers of America president said jobs were being lost “for no reason except higher profits,” according to the neighborhood news website DNAinfo.

“Wherever the wages are cheaper, that’s where they go,” he said. “When does it stop? And the real question is, when do we stop it?”

Hillary Clinton says she has a plan to do just that, and this week the former secretary of state debuted new anti-Nabisco rhetoric with clear echoes of Trump. During Sunday’s Democratic debate in Flint, Michigan, she said, “You know, when a company decides to leave like Nabisco is leaving, and they have gotten tax benefits from Chicago and Illinois to stay there, I will claw back the benefits. They will have to pay them back if they are leaving a place that actually invested in them.”

Mondelēz isn’t the only manufacturer pulling out of Chicago — some observers have called the exodus of jobs “a flood” — but the comments from presidential contenders have put the company in the spotlight.

The whole saga has been a headache for Laurie Guzzinati, the Mondelēz spokeswoman who’s done damage control since Trump’s initial remarks.

On Tuesday, she told InsideSources the Republican front-runner’s discussion of Nabisco has been filled with inaccuracies. The company is not closing its Chicago plant as Trump has claimed, and many cookies and crackers will continue to be made there.

“Oreo cookies will not be made in that Chicago bakery facility, [but] we will continue to make Oreo cookies at a number of our other manufacturing facilities in the U.S.,” Guzzinati said. She also said Nabisco is axing 600 jobs, not 1,200 as Trump has said.

As for paying back taxpayers, Nabisco’s Chicago biscuit bakery has not received an “any tax incentives or credits of any material value,” Guzzinati said. However, she did acknowledge the facility is part of a standard “enterprise zone” meant to incentivize businesses.

Mondelēz may not be thrilled to be fending off attacks from presidential candidates, especially on the week Oreo celebrates its 104th birthday. But the candidates’ statements are heartening to union organizers still hoping to fight the layoffs.

Ron Baker, a spokesman for the Bakery, Confectionery, Tobacco Workers and Grain Millers International Union Local 300, told InsideSources “there’s a change in the wind out there.”

Baker said Mondelēz wanted extraordinary worker concessions — 60 percent of employee wages and benefits — to keep Oreo production in Chicago. He called moving the labor to Mexico, with its $4-a-day minimum wage, “nothing more than stretching margins at the expense of people that work for pennies on the dollar.”

Baker is skeptical of Trump: “He may say he’ll never eat another Oreo or that it’s bad [jobs] went to Mexico, but the truth is he’s not talking about his clothing line that’s made there.”

But the labor leader is glad so many candidates are focused on the Chicago situation. He said his union has made no endorsement in the presidential race.