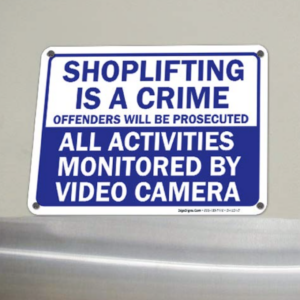 That’s how law enforcement refers to robberies where mobs storm a business, smash through the counters and make off with the loot. The National Retail Federation says in a new report, 2020 ORC losses to American retailers alone could reach $1 billion.

With Christmas right around the corner, there’s another rampaging mob: Desperate shoppers storming the internet looking for gifts amid empty shelves and a failing supply chain.

And standing by waiting to play Santa is the gangs that are driving ORC.

Sheryl McCollum is an investigator for a metropolitan Atlanta police department. Make no mistake, she says, these incidents are very highly organized and executed. Often with clock-like precision.

“When you are getting 30 people who all show up at the same place and the same time, they have already worked out how many people are coming, what store they are going to hit, and even what area of the store each person is going to concentrate on. That takes a lot of coordination,” McCollum told InsideSources. “This could very well be an offshoot of youth gangs or an even higher entity of criminal organization.”

McCollum added the types of products being targeted for theft by ORC are dictated by the clientele. That is where your own Christmas celebration comes in. Criminals want the stolen items to wind up under your tree.

“Criminals always use good things for bad purposes,” Rob Karr CEO of the Illinois Retail Merchants Association told Fox News. “That is the case for the internet as well, it is not exempt. When I started representing retailers 27 years ago, we were talking about flea markets. While that is still the case, they have migrated to an online environment.”

“It is easy to fence small items. (Nike) Air Jordans, earrings, tennis bracelets, and such can easily be sold at the high school level,” McCollum said. “Especially if they can be gotten for a bargain price.”

But the real action, according to USA-IT, is online sales.

“A lot of us are looking for products, toys, drugs, whatever it is, and this online economy has made it so easy,” Tony Carvajal with Florida TaxWatch said during a recent USA-IT summit in Washington, D.C. “You just turn on the screen and find exactly what you’re looking for and you order it, but what you’ve done when you buy those sneakers or that toy is, without knowing it, you’ve potentially sent your money to human traffickers or terrorists across the globe.”

And part of that criminal chain links right to the smash-and-grab robberies you’ve seen on TV.

Many people in shopping areas feel a bit on edge about getting involved in preventing the crimes, but McCollum said there are many ways retailers, and the public can begin to help bring about positive change.

“Instead of relying on store security, you may see stores change how retail outlets operate,” McCollum said. “You may see more stores start posting a guard outside to keep an eye out. These operations are not easy to coordinate. Thirty people showing up is going to look like a field trip. All of us need to be super aware, if you see a large group show up at once, pay attention and perhaps alert authorities. You may even see stores post pictures of items that buyers would then have to ask for, or even stay-wiring upper-end items to the shelves they are placed on.”

And, McCollum added, you can fight back from the receiving end of the illicit supply chain, too.

“If your kid gives you an item you know is stolen based on the price, for example, post it on Instagram. Put out the word these items are around and point out where (from whom) it was gotten. It only takes a little bit of effort to start shattering a pyramid like this,” McCollum said.

“Shine a spotlight on just one of the people and it can begin to have a ripple effect on the whole organization.”

Scott Kimbler is a veteran journalist based in Atlanta, GA. He wrote this for InsideSources.