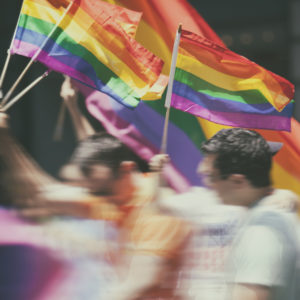 The murder of 50 people at a gay nightclub in Orlando has galvanized a new, politically savvy set of voters in the contentious, slow-moving debate over gun policy in the United States. But their challenge — helping match the formidable, longstanding muscle of National Rifle Association — could hardly be greater.

After nearly 50 years in which gun owners have run rings around their political opponents, advocates of greater restrictions on firearms brim with confidence that a vibrant alliance with gays and lesbians could put them on a winning political trajectory in coming years at the state and federal level.

Their cause for optimism stems from a brutal attack on a place that to gays, lesbians and other people of unconventional gender has always been a sanctuary from an often violently hostile world: a nightclub. It happened in Florida, but the shooting could have taken place at thousands of clubs across the United States.

“If you’re not personally connected to it, you may care about it but not at an intense level,” said Russell Roybal, interim executive director of the National LGBTQ Task Force in Washington. “Orlando hit personally close to home for many people. I’ve been to that club. I’ve never had a direct connection to gun violence.”

The nightclub attack created potent symbolism that resonated throughout the gay and lesbian community, which recently wrapped up a successful decades-long fight for marriage equality. Gun-control groups are already working closely with established advocacy groups to bring gays and lesbians into the fight. The unknowable factor for the future is whether gay and lesbian groups can mobilize forcefully and sustainably, to match the NRA.

For now, the “gays and gun control” movement is embryonic at best. Under pressure from the NRA, the Senate yesterday rejected four gun-sale restrictions on largely partisan lines, a reminder of the NRA’s influence in Washington.

Its membership has exploded during the presidency of Barack Obama, reflecting a visceral hostility that its membership and some gun owners feel toward him. Just as millions of Americans place sexual orientation at the core of their identity, so too do millions of others put the unrestricted right to bear arms at theirs.

“We are about to find out what happens when an irresistible identity movement meets an unmovable identity moment,” said Brian Anse Patrick, a professor at the University of Toledo who studies mass communication and the gun debate.

Missives about the gay and lesbian community coming down in favor of stricter gun control coursed through social media in the days after the Orlando attack, creating the kind of buzz that’s essential to any political movement these days.

“Congrats, murderer,” read one Facebook post by Don Winsor. “You have turned the focus of the LGBT community, one of the most powerful progressive movements, onto the crumbling edifice of one of our country’s biggest problems, gun reform. I don’t know if you’ve seen what they have accomplished in the past 25 years, but these queens get shit done.”

Soon after it was posted, and shared over 7,000 times, the words appeared superimposed on a rainbow-colored fist on Instagram, and had another go-around on social media.

Boots on the ground followed soon after.

Gun control advocates joined with gays and lesbians at vigils across the country, managing to be present at 40 vigils within 48 hours. Since June happened to be Pride Month, an annual occurrence commemorating the New York Stonewall riots of 1969, gun control groups joined marches around the nation almost immediately.
“What happened in Orlando was specific to the LGBT community,” said Shannon Watts, founder of Moms Demand Action for Gun Sense in America, the grassroots arm of Everytown for Gun Safety. “That was the wakeup call for them to get involved.”

The NRA claims about 5 million members. Moms Demand Action says it has 3.5 million active donors, volunteers and advocates. According to Gallup in 2012, the polling firm, 3.4 percent of adult Americans identify as lesbian, gay, bisexual or transgender, creating a potentially vast new pool of activists for gun-control advocates.

But having the people doesn’t ensure anything, except perhaps a lot of activity on social media. The challenge for gun-control advocates will be to convert them to the cause.
At a policy level, some early connections after Orlando came thanks to Robert Raben, a lobbyist who served in President Bill Clinton’s Justice Department. Raben, now a prolific fundraiser, has worked with gun-control organizations and gay and lesbian activists, which gave him a chance to introduce Everytown for Gun Safety, the Michael-Bloomberg backed advocacy group to Human Rights Campaign and the National LGBTQ Task Force, Roybal’s organization.

Raben, 52, has long been a scathing critic of the fact that the gay rights crowd isn’t more closely associated with the Black Lives Matter movement, which fights against police brutality. Raben’s rationale: a society that is tolerant enough to respect gay identity should respect black lives, and the gun-control issue might be the bridge between the two communities.

“The NRA is a white male lobby, while gun violence victims are disproportionately people of color,” Raben said. “If gay men, particularly gay white men, get involved on the gun safety side, we might push back more on the NRA.”

There are tentative signs that the most potent gay lobbying group, Human Rights Campaign, will make gun control a signature issue. After a special board meeting on Thursday, the group threw its weight behind tighter gun restrictions, and placed its new stance squarely in the context of Orlando as an anti-gay hate crime.

“Forty-nine members of our community were murdered on Sunday morning because of a toxic combination of two things: a deranged, unstable individual who had been conditioned to hate LGBTQ people, and easy access to military-style guns,” Chad Griffin, the group’s president, said after the meeting. “It is imperative that we address both issues in order to mitigate safety risk to our community.”

More than 20 percent of hate crimes reported nationally in 2014 targeted people based on their sexual orientation or gender identity, according to FBI statistics, Griffin pointed out.

Even as the gay and lesbian community mobilizes, the NRA and its supporters are pushing back against the narrative that the Orlando shootings were primarily a hate crime aimed at gays. To Wayne LaPierre, the NRA’s executive vice president, a “politically correct White House” is trying to change the subject away from the threat of terrorism.

“We all mourn for what happened,” LaPierre said on Face the Nation. “But we face a terrorist challenge.” The White House essentially tells the public, “Don’t look at terrorists. Look over here. Take your eyes off the problem.”

Patrick, the University of Toledo professor, said no movement in the gun debate can yet match the NRA’s intensity, its ability to convert an identity into political action.

“They are capable of specific political behavior, in concert, over time,” he said. “Maybe the LGBT movement will do this. We’ll see.”

Kristin Goss, a professor of public policy at Duke University, said the difference this time might be that the magnitude of gun violence in Orlando, aimed at gays and lesbians, might finally be enough to jar them into long-term political action.

“Gun violence is now ensuring that groups not normally affected by gun violence see the urgency of the issue,” Goss said. “That’s different.”