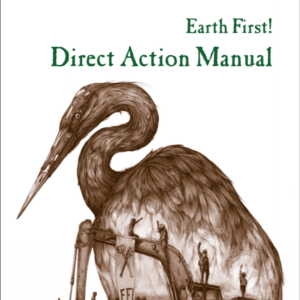 They call it DAM. That’s short for Direct Action Manual. Groups connected to the protest camp for the Mariner East 2 pipeline in Pennsylvania are selling copies for $25. Published by Earth First! — an openly radical environemntalist group and journal — the manual lays out protest techniques for use by environmentalists. Some of these approaches were even used at the pipeline protests in North Dakota last year. Earth First! supports violent actions against energy infrastructure development and the manual itself is essentially an ecoterrorist’s handbook, laying out techniques and approaches to stop various forms of energy infrastructure development. Now on its third edition, its publishers are supporters of the protest against the Mariner 2 pipeline in Pennsylvania and worked to stop the Keystone XL pipeline in the past.

The Direct Action Manual argues for an “Earth first” campaign built on tenets of biocentrism, direct action, and a rejection of compromise. The group believes in the connection and value of all life on earth and seeks to protect it specifically using techniques that fall outside of the political process. And they refuse to “sell out” their principles for anything less than complete victory.

The result is a document that calls for “strategic civil disobedience,” while acknowledging that these actions are crimes. The Direct Action Manual’s radical tone is evident from its first line, which describes how activism is needed as “the staggering forces of greed push consumerism and the wholesale destruction of the Earth to unheard of levels.”

At the same time, the Direct Action Manual takes an expansive view of acceptable protest locations and actions, encouraging activists to bother opponents at home and even engage in vandalism.

“The possibilities are really endless, and you should let your imagination run wild,” the Direct Action Manual advises. “Do they only value money and property? Some slashed tires, paint stripper, and sand in the gas tank can certainly make them think twice about if their choices are worth it…Channel your inner younger sibling energy and you’ll be sure to make someone’s life hell.”

This is followed by a section detailing how to turn off lights and water at someone’s home or business and recipes for DIY stink bombs and “critter bombs,” involving a dead animal.

Of course, these actions are likely to result in arrest. The Direct Action Manual helpfully suggests that protesters figure bail into the costs of their actions.

“When planning an action where arrests are possible, fundraise ahead of time to put money aside for bail or bond,” the handbook advises. This approach has been adopted at several of the larger pipeline protests, which have taken to sites like Fundrazr to raise money. At Standing Rock, the protest camp quickly amassed millions of dollars of donations earmarked for bail and legal fees through online donations last summer.

Examples of ecoterrorism are interspersed with instructions on how to wage a more conventional public relations campaign by researching investors, political connections to the energy companies, and office locations to find targets for demonstrations and protests. It also explains how to talk to the press about a protest issue, suggesting that limiting the locations of interviews and selecting which journalists to talk with helps to get the appropriate environmental message out.

Predicting the rise of social media at Standing Rock, the Direct Action Manual says that the best means of getting media attention is probably to create your own on the internet.

“Be the media you wish to see in the world,” it reads. “To ensure the coverage that you want, document your actions with your own photographers and videographers.”

Admittedly, certain sections are somewhat outdated. The Direct Action Manual includes detailed instructions on how to use fax machines to harass an office by using up all their printer toner. It also describes various types of radios and how to use them (don’t say ‘Roger’ at the end of a message) for several pages.

Although some of the tactics describe are ecoterrorism on a level not seen in today’s pipeline protests, others are being used by opponents of the Dakota Access Pipeline, the Keystone XL pipeline, and other energy infrastructure projects. Some of these techniques include barracading offices, like DAPL protesters did at various Wells Fargo locations last fall, and having phone-in days (pipeline protesters encouraged this at various points before the Army Corps of Engineers granted the easement).

The first edition of the Direct Action Manual was published decades ago. However, its continued connection to the broader pipeline protest movement shows that the environmental anarchy it advocates is still a part of today’s protest movement. Today’s pipeline protests have adopted a narrative of native rights and emphasize a connection to indigenous people, reflecting the influence of Standing Rock. Still, the “love and rage and anarchy” of the Direct Action Manual are present in the actions protesters take.