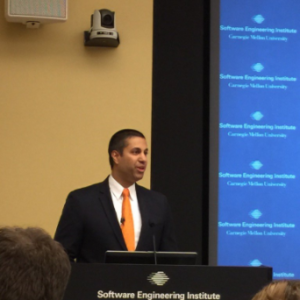 The new chairman of the Federal Communications Commission thinks the agency should take the reins in administering the broadband portion of President Donald Trump’s $1 trillion infrastructure package.

“In the digital age, I believe our wired and wireless broadband networks are core components of our nation’s infrastructure,” Pai told attendees. “That’s why my position is clear: If Congress moves forward with a major infrastructure package, broadband should be included.”

Pai highlighted the high-tech jobs that have replaced Pittsburgh’s shuttered factories and steel mills as an example of how broadband can change the U.S.’s economic landscape and “close the digital divide,” the primary goal of his chairmanship.

“As chairman, I plan to focus more time and attention than the FCC traditionally has on places where people feel left behind—places that Washington too often looks past,” he said.

Though Trump didn’t mention it in his pitch to Congress for the infrastructure package in February, he’s named broadband as part of the initiative before. Congress should get on board, he argued, and designate the FCC to decide where the money goes through its Universal Service Fund.

The fund has been successful in helping deploy broadband to rural and unserved areas, and the FCC has much better track record at taking on those projects than other agencies like the Commerce and Agriculture Departments, whose efforts Pai pointed out failed to get off the ground.

He also stumped for Congress to include his plan for “gigabit opportunity zones” in the bill. The plan calls on Congress to work with the FCC in granting tax subsidies for broadband providers to build high-speed networks in poor communities, and clear the local government red tape providers have to wade through to start construction.

Cutting-edge broadband will pave the way for the tech jobs to replace industrial and manufacturing hubs that have left towns like Pittsburgh, already in the midst of its own revolution. The chairman plans to spend the rest of the week on the road to cities ripe for undergoing a similar shift, like Cleveland and Detroit.

In Pai’s view closing the digital divide also translates to doing away with regulations that could hold back investment like net neutrality, which he vaguely referenced.

“The public interest is best served when the private sector has the incentives and freedom to invest and create,” he said. “That’s why we must eliminate unnecessary barriers to investment that could stifle new discoveries and services. In particular, the government should aim to minimize regulatory uncertainty, which can deter long-term investment decisions. The government should also be as nimble as the industry we oversee. That’s easier to say than to achieve, but it must be the goal.”

Innovation is another key component of Pai’s economic goals, and he pledged Tuesday the FCC will do its part by approving the use of new tech and services within a year, as a previously unenforced agency rules requires.

Under Pai’s leadership the agency has already shown a willingness to give new ideas a green light. In the near-two months since his takeover, the FCC approved a new TV broadcast technology that incorporates broadband known as ATSC 3.0 and LTE-U capable smartphones, which borrow Wi-Fi when mobile airwaves are crowded.