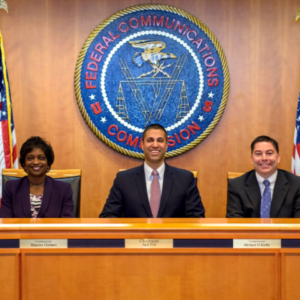 The new chairman of the Federal Communications Commission was silent on the subject of net neutrality during the new administration’s first open meeting Tuesday, saying only that his first priority will be to “close the digital divide.”

During his first meeting as head of the FCC, Chairman Ajit Pai said he’s “not going to make any news today” about repealing the net neutrality order championed under his predecessor Tom Wheeler.

“We haven’t made any determinations at this time, my position’s pretty simple — I favor a free and open internet, and I oppose Title II,” Pai said referring to the rules’ reclassification of broadband providers as more heavily regulated public utilities. “That’s pretty much all I can say about that topic.”

Pai, who voted against the rules as a Republican commissioner in 2015, also refused to comment on whether his agency would simply refuse to enforce the rules prohibiting internet providers from blocking, throttling or prioritizing web traffic.

“If I had to speculate, I would speculate that I would give you exactly the same speculation that I speculated about before,” Pai joked while declining to answer numerous questions from reporters on the topic.

Pai and fellow Republican commissioner, Michael O’Rielly, said in December they would “revisit” net neutrality “as soon as possible” after claiming their new 2-1 majority at the FCC over Democratic Commissioner Mignon Clyburn.

Earlier in the month before being tapped to lead the agency, Pai said Republicans would “shift from playing defense at the FCC to going on offense” and “fire up the weed whacker and remove those rules that are holding back investment, innovation, and job creation,” critcisms he and other Republicans have leveled against net neutrality.

So far the two have guaranteed passage of an order to exempt small internet providers from transparency requirements included in net neutrality rules like divulging hidden fees. Pai described the requirements as a burden on “mom-and-pop” providers that would take away resources from expanding their networks. He wouldn’t go into detail on other ways he may curtail the rules.

Instead, the new chairman announced the creation of  a new FCC advisory committee that will explore ways to accelerate deployment of high-speed Internet access nationwide and “close the digital divide,” which Pai said would be the focus of his chairmanship earlier this month.

The newly created Broadband Deployment Advisory Committee (BDAC) will take on “reforms to the FCC’s pole attachment rules; identifying unreasonable regulatory barriers to broadband deployment; ways to encourage local governments to adopt deployment-friendly policies; and other reforms within the scope of the commission’s authority,” according to an agency statement Tuesday.

One of BDAC’s first tasks will be to develop a model framework for local governments to follow when providers seek to deploy broadband in their area. The model code will cover franchising, zoning, permitting, and rights-of-way regulations. The committee will hold its first meeting by spring.

“Building, upgrading, and deploying broadband networks isn’t easy, and red tape often can make the task harder than it needs to be,” Pai said. “Similarly, many localities that have a strong interest in promoting a digital economy within their borders may not have the resources or expertise to develop and implement deployment-friendly policies. Consumers ultimately pay the price in terms of less access to next-generation services.”

The committee reflects previous efforts by Pai to expand broadband in rural and underserved areas like his home state of Kansas. He outlined similar proposals last year to work with Congress to create what he dubbed “gigabit opportunity zones” in poor areas to boost broadband deployment and high-tech businesses and jobs.