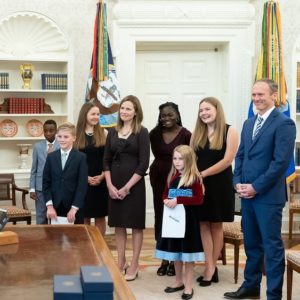 Parents With Many Children Succeed with Dignity and Grace

The Senate Judiciary Committee’s Supreme Court confirmation hearings — to fill the seat vacated by the late Justice Ruth Bader Ginsburg — evoked predictable slights to Judge Amy Coney Barrett, given she is viewed as a conservative jurist, a Catholic and one chosen by President Donald Trump.

For these slights, all will get a pass, as all of these seem commonplace in today’s politics.

One remarkable and endearing characteristic of  Judge Barrett is she is the mother of seven children. Slights made to her ostensibly and under the breath will expose the hypocrisy of those claiming choice for all women, diversity, inclusion and being nonjudgmental.

Unfortunately, many people view, and openly express, that parents with large families are ignorant to the ways of the modern woman or inconsiderate of the future of our planet.

As one who grew up in a large family, and one who knows many parents with large families, I know it is unfortunate that these commentators know little about large families and the dignity of these parents.

In fairness to them, Hollywood, television, literature, and other entertainment outlets have missed the mark on what big families are like. They treat us as either institutional or Pollyannaish. We are neither.

One of the most frequent, and thoughtless, questions to parents with large families is if they “know the names of all of their children.” Don’t all parents know this? We were not the Von Trap Family as shown in the Sound of Music — singing while going to bed agreeably.

Putting many children to bed is hard work, getting them up even harder, and everything in between takes a great deal of wisdom, discipline, forbearance, creativity, self-sacrifice and good humor.

Novels often depict the big families as some backwater group, for which the reader should view as peculiar and show sympathy. Films, such as Cheaper by the Dozen depict big families as living in chaos.

Big families have the same challenges as any other family, just more of them. Some people think there is some slippage in the “love given to all of those children.” My mother said “A family is a family whether one child or many. Every child, no matter how many, is special.”

The academics have neither the interest nor the time, apparently, to learn about big families. There is a dearth of research on big families, and in any natural place, you would expect “the experts” to be curious, such as family studies, sociology, psychology, anthropology or economics.

Oddly enough, the Catholic Church has given little interest in recent years to large families. Even the Pope spoke nary a word about large families in the 2015 World Meeting of Families held in Philadelphia.

The top of the long list of slights people give to the parents or children of big families occurred for me, surprisingly, at a public health conference.

A woman who represented an international public health organization asked me in front of a group of people — some whom I had just met — if “my mother really wanted to have all of those children.” This is the proverbial loaded question. Ironically, this woman was on the dais the next morning in a plenary session preaching to us about social justice, inclusion and not being judgmental.

Judge Amy Coney Barrett is clearly a woman of faith; a woman joyfully in the family way.

Having strong academic and religious formation, I am sure she  knows the wisdom of Saint Ignatius of Loyola, founder of the Jesuit Fathers, that one needs to use all of their God-given talents in life. People wonder, “How did your mother and father do it” [raising such a big family]?

Not so hard when you are given dignity and grace. That is the gift these parents of large families receive.

This is a set of characteristics that senators should also consider when voting on Judge Barrett’s confirmation.

Her dignity and grace will not be compromised, regardless of how many thoughtless slights are given to her.