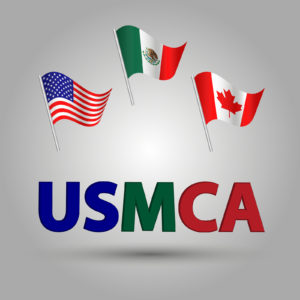 Passage of USMCA Will Help End the Border Crisis

It is time to get creative about solving the crisis at the border. The U.S. Border Patrol says the border is at its breaking point as it apprehended almost 100,000 people at the border in April. But threatening to impose tariffs until Mexico stops the flow of illegal immigrants, as President Trump announced last week, is not the solution.

This is a crisis driven by desperate people leaving behind rampant crime, failing economies and persistent agricultural failures. The large majority of those crossing the border are Central American families or unaccompanied minors seeking asylum. Their journeys from their homes to the United States are driven by desperation. Unlike past border crises, these migrants are not trying to evade law enforcement when they enter U.S. territory.

As the refugee inflow grows, criminal networks are using the chaos for their own purposes — smuggling drugs and criminals across the border while American authorities are overwhelmed finding desperate people and then processing their asylum claims.

By any definition, this is a crisis. And partisan solutions will not solve it. Congress must find a bipartisan way forward that can reduce the pressure at the border while encouraging the Mexican government to help solve the border crisis. The way forward begins with passage in Congress of the U.S.-Mexico-Canada (USMCA) free trade agreement.

Passing USMCA would update NAFTA for the 21st century. It would confirm the long-term economic partnership between the United States and Mexico, while solidifying the bilateral diplomatic and security relationship as well.

The renegotiation of NAFTA includes important modernization provisions that will help American businesses, particularly energy producers and auto manufacturers, while ensuring that the benefits of trade are felt on both sides of the border.

But trade deals as big as USMCA are always about more than just economics. They are about choosing geopolitical and security partners as well. The United States is fortunate that we’re bounded by oceans on two sides, while our other two borders are friendly countries. We must do more to tie our southern neighbor closer to the United States. A border can only be secure if both sides work to secure it.

Thanks largely to NAFTA, Mexico’s economy has grown to the point where according to Pew Research Center Mexicans no longer cross illegally in the United States in large numbers. Improving economic prospects in Mexico mean that there has actually been a net-negative migration between the United States and Mexico, as more Mexicans move back home than those who come here.

Furthermore, USMCA is a secret weapon in the trade conflict with China. A thriving Mexican economy means that, instead of importing goods from China — a country noted for its unfair trade practices, the United States is importing more from Mexico. This is better for American workers because Mexican manufacturing largely uses American-made parts and technology. That means more exports from the United States thanks to NAFTA and the integrated North American supply chain.

The thriving cross-border trade creates jobs and builds security on both sides of the border. People with jobs do not join drug trafficking gangs. Unfortunately, the migration crisis is hampering cross-border trade, as customs officials are taken away from ports of entry — where they process trucks loaded with goods for the American market — in order to process asylum claims.

Mexican President Andres Manuel Lopez Obrador, in power for less than a year now, surprised many who had followed his long career on the left of Mexican politics by supporting USMCA. If Congress fails to pass the trade deal, his government will quickly learn that supporting the United States doesn’t lead far.

The effect could be extremely damaging to security cooperation. The Merida Initiative, begun in 2008 as a way to target transnational criminal networks and drug trafficking, provides American aid to Mexican security forces in their battles against the cartels.

Lopez Obrador said recently that he wants to end this initiative, claiming he wants “cooperation for development, not for the military, not for the use of force.” While development is an important way to reduce insecurity in impoverished regions, we should not sacrifice the critical bilateral security cooperation that is putting people like Joaquin “El Chapo” Guzman in American prisons.

Swift passage of USMCA will confirm to Mexico that their partnership with the United States is strong and lasting, no matter the rhetoric. It will give credence to American efforts to continue the Merida Initiative and ensure that American law enforcement agents have a direct relationship with their Mexican counterparts.

USMCA would encourage job growth on both sides of the border. At its heart, this crisis is not a security crisis (though there are national security aspects), so the solution will not be found in walls or expansion of the Border Patrol. Congress must prioritize USMCA, passing it in a bipartisan fashion as a part of the solution to the border crisis. Tariffs will only get in the way.

Andrew Holland is the chief operating officer of the American Security Project, a nonpartisan national security think tank. He wrote this for InsideSources.com.