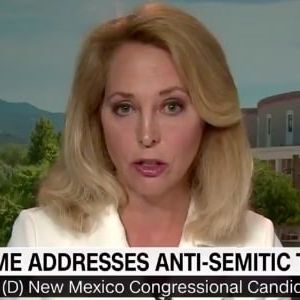 Valerie Plame: I Was ‘Foolish’ for Promoting an Anti-Semitic Website

In recent days, newly-minted New Mexico congressional candidate Valerie Plame has taken to the airwaves to apologize for sharing anti-Semitic articles in 2017, saying she was “foolish” for promoting the website.  Plame’s source of the anti-Semitic tropes was the Unz Review, a website operated by Ron Unz, a well-known Holocaust denier.

Plame retweeted a link to an article entitled “American Jews Are Driving America’s Wars” which includes lines like “Jewish groups and deep pocket individual donors not only control the politicians, they own and run the media and entertainment industries.” When confronted on CNN’s “New Day” by anchor John Berman over why she originally indicated she liked it, Plame said,  “I didn’t like it … The only thing that I focused on in that article was I thought it was a very bad idea to get out of the Iran nuclear deal. That’s very much what I was focused on,” she said. “I stupidly did not read the rest of the article and when I did, I was really horrified. It’s anti-Semitic. That has no place, at any time, anywhere.”

Plame said she is not an anti-Semite and her actions were “human” mistakes.

“It’s not who I am. it’s not what I believe and I apologized as sincerely, and with heartfelt conviction, as I possibly could,” Plame said. “And there will be people who will understand, ‘you know, she’s human she messed up she didn’t read the whole article.’ And I look forward to moving forward and contributing in other ways.

“[I was] really foolish and I’m embarrassed by that whole episode. I should not have been anywhere near social media or a computer at that time in my life,” she said.

Plame made similar apologies on MSNBC a day earlier. “It was really just a painful period but I want to move forward. That’s not who I am,” she said on “Kasie DC.” She also called her actions “a doozy.”

As InsideSources reported on May 13, her tweets have since been removed and her personal website now features a lengthy apology.

New Mexico’s Jewish community is relatively small,  estimated at approximately 25,000. However, the communities are robust and well represented by synagogues and social groups, particularly in Albuquerque and Santa Fe.

Zach Benjamin, executive director of Albuquerque-based Jewish Federation of New Mexico, said his organization doesn’t endorse candidates. But when asked about Plame’s comments, he made it clear they had no place in political dialogue — and were dangerous.

“It’s important to make clear that the Federation doesn’t take positions on candidates for office,” Benjamin told InsideSources. “But … what happened is an opportunity to be vigilant against anti-Semitic language creeping into [any] kind of mainstream political conversation.”

Benjamin strongly suggested that anti-Semitism is being ignored nationwide.

“I think we really are seeing that what we might call anti-Semitic tropes or dog whistles are being ignored and thus allowed to fester, so we want to make sure this doesn’t happen here locally,” he said. “And that we are able to educate the community on what anti-Semitism is, why it’s so insidious and the fact that it is a vicious and potentially lethal form of prejudice — like any other — and should be fought as vigorously as any other type of bias.”

Rabbi Neil Amswych, whose leads Temple Beth Shalom in Santa Fe, told InsideSources he believes Plame has atoned for her actions, although “we certainly would have preferred that she had never posted such things to begin with.”

“I do urge people not to take my word for it, though,” he said in an email. “Individuals who have questions should pose them to her and make up their own minds.”