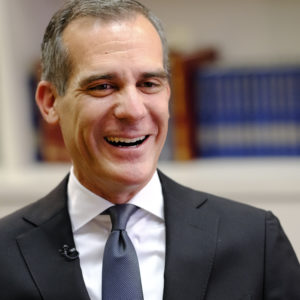 Los Angeles Mayor Eric Garcetti talks during an interview with the Associated Press in Los Angeles on Thursday Aug. 16, 2018. Garcetti, who already has visited the important presidential states of Iowa and New Hampshire, told The Associated Press he'll likely make a decision on his candidacy in the first three months of 2019. He also talked about his efforts to resolve chronic issues LA issues of traffic and homelessness. (AP Photo/Richard Vogel)
News

Los Angeles Mayor Eric Garcetti is raising $1 million for 10 Democratic state party organizations and–no surprise–#FITN New Hampshire is one of the chosen few.  Axios.com reports that the Democratic Midterm Victory Fund (DMVF) is hosting a fundraiser in L.A., headlined by Garcetti, on September 25, and shipping the cash to state organizations across the country.

Garcetti is also traveling to South Carolina next month to raise money for the Charleston County Democratic Party–one of the key Democratic organizations in this deep-red southern state. He’ll be giving the keynote at the Blue Jam, an event that in the past has featured Secretary of State Hillary Clinton and Sen. Bernie Sanders.

Garcetti was in South Carolina in February, hosting a $100,000 fundraiser for the state Democratic Party.

Democratic strategist and former advisor to California Senator Barbara Boxer Rose Kapolczynski describes Garcetti as “mayor of one of the Democratic ATMs.”  She says his Hollywood ties and access to California Democratic money give him an advantage over potential POTUS candidates in other parts of the country.

That’s an advantage over say, [Montana Sen.] Jon Tester,” she told Politico.com.  “You’re not going to raise a lot of Democratic money in the state of Montana, as lovely as that state is.”