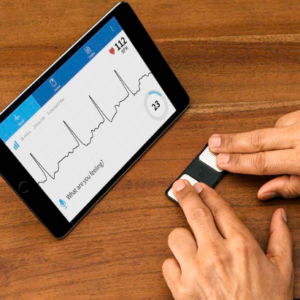 My iPhone’s slender $100 attachment may one day save my life. Possibly, it already cut America’s healthcare expenditures by thousands of dollars. The AliveCor Kardia, invented by David Albert, enables my iPhone to perform a clinical-quality electrocardiogram in 30 seconds.

Cardiologist-author Eric Topol says the smartphone may become the most important diagnostic medical device of this century. Earlier this year, I spoke to 250 health plan administrators in Phoenix. I explained how AliveCor benefits patients who have experienced atrial fibrillation (a-fib), an intermittent cardiac arrhythmia that, if left untreated, can spawn a stroke.

As AliveCor performs an EKG, it records and transcribes whatever you say aloud, so you can, for example, describe your symptoms or medications. Afterward, AliveCor instantly analyzes your heartbeat and displays “no abnormalities detected” or “possible a-fib.” By tapping buttons, you can email the EKG to anyone. AliveCor specialists will even read your EKG ($9 for a technician in under an hour or $19 for a cardiologist in under a day).

In Phoenix, I cited two distinct benefits: discouraging unnecessary emergency room visits and encouraging necessary ones. Then I flew home to Virginia. The next morning, I awoke to a pounding heartbeat — my first and (thus far) only episode of a-fib. Fortunately, ER treatment quickly returned my heart to normal rhythm. CT, echocardiogram and blood tests showed no physiological problems, so they sent me home. The next morning, I swam a mile.

Now on a beta blocker, there’s been no recurrence of a-fib. However, two minor episodes highlighted AliveCor’s value. A dozen days after the a-fib, my heart rate sped up considerably. (I had been off medications for several days to prepare for a treadmill test.) I returned to the ER. An EKG showed moderately rapid heartbeat, but normal rhythm. They sent me home. This peace of mind cost my insurers several thousand dollars.

Soon after, I bought a FitBit to monitor my heart rate and an AliveCor to test for a-fib. Three days after it arrived, during another speech, I performed an EKG for the audience. Midway through my six-hour drive home, I felt a fairly rapid heartbeat, confirmed by the FitBit. The road was beautiful and empty, so it wasn’t driving stress. The nearest significant town was 20 miles away, but I contemplated heading for its hospital. At the next service station, an EKG said my heartbeat had slowed, with no sign of a-fib. Night falling, I calmly headed out for the remaining three-hour drive.

Without AliveCor, this episode could have become another visit to the ER, unnecessary healthcare spending, and an unwanted motel stay. Since then, whenever I’ve felt a mild thumping (say, while mowing grass), AliveCor has always signaled the all-clear, easing my concerns.

In contrast, one of the Phoenix attendees described a 37-year-old friend who failed to recognize an a-fib episode, took no action, and died of a stroke. She wondered whether AliveCor might have saved her friend.

Dave Albert, AliveCor’s inventor, said not a week passes without an email saying, “Thanks for saving my life” or the life of someone dear to the writer. An Oklahoma City physician, Dave is grandson of a coal miner, a Rhodes Scholar, and son of the late Speaker of the House Carl Albert. He dreamed up AliveCor in the mid-1990s, but it wasn’t technologically feasible at that time. Why focus on a-fib, I asked? Paraphrasing Willie Sutton, he answered, “Because that’s where the patients are.”

His idea was rekindled while attending a lecture by Steve Jobs. During the talk, the Apple founder said the iPhone “is going to change everything.” Smartphones give owners the power of a 1990s supercomputer — enough to make AliveCor feasible. But equally important, the idea of empowering patients — letting them take charge of their own health — is commonplace in the 2010s. In the 1990s, Dave said, that idea simply did not exist. A self-described techno-optimist, he is confident that technologies like AliveCor are merely the start of a revolution that will change healthcare radically, and for the better.

For me, and others like me, the revolution is already here. One big question: When I show AliveCor to medical or insurance professionals, why have so few heard of it?