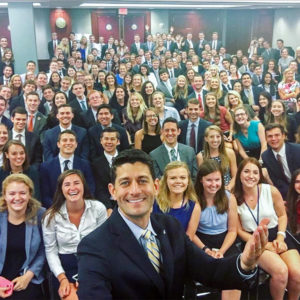 Both chambers of Congress announced that they reached an agreement over the first of three appropriations bills intended to fund the government and avert a partial shutdown in October.  Recently, the GOP-led House voted to pass the bill with 377 ‘yea’ votes to 20 ‘nay’ votes. The Senate passed the conferenced version of the bill 92 ‘yea’ votes to 5 ‘nay’ votes. All that remains for this minibus to become law is President Donald Trump’s signature.

Despite the minutia associated with this spending package, new funds will be appropriated to the legislative branch to pay House and Senate interns. Matched with a pay freeze for members of Congress, these newly approved funds for intern salaries presents a set of unique opportunities.

Historically, congressional interns were mostly unpaid. Most interns worked for academic credit and potential prospects for work after their degree programs. Many have also accepted the prestige of such an experience as a return on their investment. Around 90 percent of all internship positions on Capitol Hill are unpaid postings. Individuals of great wealth and specific socio-economic demographics have long dominated the selection process for internships, as well.

Congressman Tim Ryan (D-OH) authored a budget amendment which authorizes paychecks for House interns. “Because the bulk of Congressional Internships are unpaid, they are implicitly easier for individuals from privileged backgrounds to participate in and complete,” Ryan said in a press release. This budget amendment also follows a Senate initiative to pay interns spearheaded by Sen. Chris Van Hollen (D-MD).

A total of $ 8.8 million for paying House interns and $5 million for paying Senate interns was appropriated in the final form of the bill. These numbers equate to $20,000 per House member office and $50,000 per Senate member office for annual intern budgets. According to proponents of this legislation, underrepresented populations will have better representation in internship positions on both sides of the aisle.

Internship programs and their competitiveness vary from member to member. Application processes, the popularity of a particular program, and the socio-economic demographics all impact intern selection. For example, Republican members are more likely to represent a district where constituents are predominately white. Therefore their application pool is predominately white. Conversely, a Democratic member is likely to serve an area where nonwhite individuals have a collective majority over white constituents. An application pool for an office like this is likely to be more diverse. But, there are still a few issues that remain.

The annual Vital Statistics on Congress report, released by the Brookings Institution, the American Enterprise Institute, and the Campaign Finance Institute, reveals that the vast majority of Congress is white.

Though there is little-documented correlation among the demographics of congressional members and their interns, these numbers are still significant to note. Additionally, the Joint Center for Political and Economic Studies found that only 13.7 percent of all top House staffers are people of color. These same findings note that “Both White Democrats and White Republicans hire overwhelmingly White top staff, even though their districts are surprisingly diverse.” Other trends in these findings show disparity and a lack of diversity in senior House workforces.

That said, bringing in paid interns creates a competitive environment that merits analysis of an individual’s academic, professional, and personal achievement. This sentiment provides more scrutiny and equalizes this playing field in a capacity that isn’t built on nepotism or someone’s societal preferences. Plus, there is no denying the financial benefits this will provide for interns of all social and class identities willing to work on the national stage and set up shop in the expensive neighborhoods of D.C. for months at a time.

Paid internships could potentially be real investments in human capital development. Based on 2014 data released by the National Association of College and Employers, 42 percent of all surveyed students who worked in a paid internship were offered full-time positions at the completion of their program. Most staffers on Capitol Hill started their careers as interns. The benefits of paid internship programs are also plentiful.

According to Heidy Rehman, in a column for Entrepreneur, paying interns guarantees organizations increased output. Rehman wrote: “As with anything if we don’t pay for it, we’re more likely to waste it.”