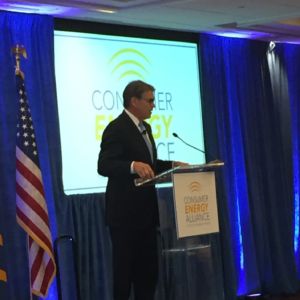 Perry: Digital Infrastructure Is “Under Attack” and US Energy Sector Needs to Be Ready

As Secretary of Energy, Rick Perry has played a hybrid role–part geopolitical negotiator, part industry advocate, part cheerleader for American progress. It is much more rare to hear him speak about the vulnerabilities or weaknesses of America’s energy infrastructure as he did at a forum hosted by the Consumer Energy Alliance on Thursday.

“I think it is really important for us as a country to have an energy infrastructure plan in place, because it is about the energy security of this country. Energy security isnational security,” Perry said.

In the past, energy security has been discussed in terms of the security of the supply of fuel. Increased domestic production has eased these concerns. Today, national security experts are worried about the electric grid itself, which they they warn is vulnerable to a cyber attack that could knock out power to consumers, hospitals, and civil defense facilities.

As Perry explained, 99 percent of the military bases in the continental U.S. are connected to the civilian grid. This means that they are also vulnerable to attacks against the broader electric grid. So far, no such attack has been successful, but Perry believes we are living on borrowed time.

“The threat of cyber attacks is growing, it’s metastasizing,” he said, explaining that Dan Coats, the director of National Intelligence, has warned that threats in the cyber realm are at “pre-9/11 levels.”

“The warning lights are blinking and they’re blinking red,” Perry warned. “Today the digital infrastructure that preserves this country is literally under attack.”

In order to protect energy infrastructure against such attacks, Perry has made cyber security a major focus of his time as secretary. Earlier this year, the department announced major new initiatives focusing on cybersecurity, including the creation of a new office of Cybersecurity, Energy Security, and Emergency Response (CESER).

In conjunction with the CESER’s creation, the DOE released a new multiyear plan to leverage private sector partnerships to strengthen existing cyber systems while also promoting programs to develop new techniques for the future by accelerating research and develop of resilient energy systems.

Perry admitted that technology alone will not solve the problem. Instead, America needs to continue to develop and train a cybersecurity workforce that can adapt to new threats.

“Funding cutting-edge research alone will not get the job done,” he said. “We will need people. We need to recruit young men and women into this very exciting field to becoming cyber professionals.”

Perry sees not just threats, but also opportunities: Cyber security is an exciting new field, full of opportunities for young and innovative minds. To promote these opportunities, the DOE is helping to organize cybersecurity competitions where teams of college students are paired with staff from various government labs for hacking competitions. One team will try to attack the infrastructure while the other attempts to defend it in real time.

These competitions are meant to both encourage student interest in the field and to help them hone their skills in real life scenarios. This new focus on cyber security might seem like the DOE is getting away from its primary focus, but Perry defends the changes as necessary in light of new threats.

“When it comes to increasing the resilience and reliability of our energy infrastructure this isn’t just about winning it’s about succeeding and achieving the goals we need,” Perry concluded.