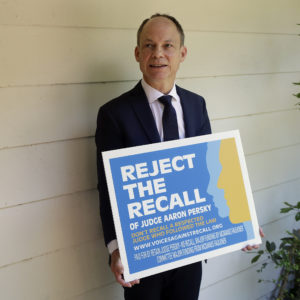 FILE - In this May 15, 2018 file photo, Judge Aaron Persky poses for a photo with a sign opposing his recall in Los Altos Hills, Calif. Northern California voters are deciding on Tuesday, June 5 whether to remove Persky from office for the first time in decades because he sentenced a former Stanford University swimmer convicted of sexual assault to a short jail sentence instead of prison. Persky would be the first California judge recalled from office since 1932 if a majority of voters choose to remove him on Tuesday. (AP Photo/Jeff Chiu, File)
[IS] Opinions

Santa Clara County, California voters gave all Americans a lesson in popular sovereignty when they recalled Superior Court Judge Aaron Persky. Citizens were vexed by Persky’s sentencing of a Stanford University athlete, whom a jury had found guilty of assault with intent to commit rape and related felonies, to just six months in jail. The crimes carried up to 14 years in prison, and prosecutors had asked for a six-year sentence. By an overwhelming majority, voters removed Persky from office.

Unfortunately, most pundits and academics are expressing disdain for the voters and ominously warn that judicial independence is threatened across the country. Ninety-one California law professors signed a letter warning that use of the recall procedure “threatens the fundamental principles of judicial independence and fairness that we all embed in the education of our students.”

Herein lies much of the problem.

For decades law professors have inculcated in future lawyers, judges and legislators the principle that judicial office is something like a divine ordination. Men and women cloaked in the black robe deserve deference and must not be censured for their actions on the bench. In this regard, they are placed on a pedestal above other officers of government in the legislative and executive branches.

Such teaching would be anathema to our Founding Fathers. The American Revolution was fought to free the colonists from the British Parliament, which claimed the authority to make laws for the Americans in all cases whatsoever. The colonists had been schooled in British dogma that Parliament was absolutely sovereign and, in the famous legal commentator Sir William Blackstone’s words, could make or unmake any law as it saw fit.

But patriots protested that they had no representation in Parliament and eventually questioned whether any branch of government could claim ultimate authority over the people.

In establishing independent states, Americans based their governments on popular sovereignty (i.e., the people possessing ultimate authority). For example, the Massachusetts Constitution of 1780 declared that the people possess “all power” such that government officers “are their substitutes and agents, and are at all times accountable to them.”

As a derivative of this power in the people, they “alone have an incontestable, unalienable, and indefeasible right to change the same, when their protection, safety, prosperity and happiness require it.”

St. George Tucker, the premier legal theorist in the early 1800s, similarly described the Revolution as resulting in the people possessing “indefinite and unlimited power.” Founding Father James Wilson noted in his lectures at the College of Pennsylvania that no branch of government “can be set up as co-equal with the authority of the people. The supreme power is in them.”

The removal of Judge Persky is nothing more than the people holding a government officer accountable for endangering them with a soft-touch sentence. Contrary to the squeals from academia, the removal of Judge Persky does not eviscerate a reasonable version of judicial independence. Indeed, Persky is the first California judge to be recalled in 86 years. That’s hardly an assault on judicial power.

The Persky recall should remind all of us that judges — federal, state or local — are mere agents of the people, just like councilmen, representatives and governors. The black robe does not endow a person with the wisdom of Plato’s Guardians and thus elevate the judiciary to sacrosanct status. The carte blanche for judges demanded by the law professors would permit the people’s agents on the bench to exercise unfettered discretion much as the British Parliament exercised over the colonies.

Of course, not all jurisdictions have judicial elections and a corresponding recall process. In jurisdictions with no recall procedure, citizens and legislators should dust off their constitutions and examine impeachment methods and the provisions allowing for the stripping of court jurisdiction in certain matters. They’ll discover that options are available to deal with judges who insist on making policy rather than applying the law or who regularly endanger the safety, prosperity and happiness of the people.

William J. Watkins, Jr. is a research fellow at the Independent Institute and the author of the new book "Crossroads for Liberty: Recovering the Anti-Federalist Values of America’s First Constitution."