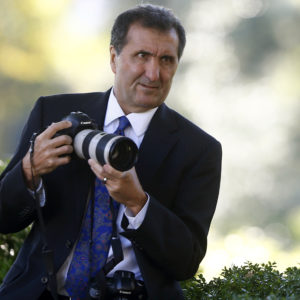 FILE - This Oct. 21, 2013 file photo shows official White House photographer for President Barack Obama, Pete Souza, during an event in the Rose Garden of the White House in Washington. Obama has officially blessed a book by his White House photographer. Obama is contributing a foreword to Souza’s “Obama: An Intimate Portrait," Little, Brown and Co. told The Associated Press on Monday. Souza’s book comes out in November (AP Photo/Charles Dharapak, File)
[IS] Opinions

Pete Souza an Eyewitness to History as Obama’s Photographer

One’s mission in life often hinges on an intersection — at the corner of purpose and opportunity.

A 90-minute photo slide show and all, before a sold-out audience. His compelling presentation was more than just a picture show. It also was about humanity and relationships — elements to which we all can relate.

By now, most of us have read or seen on television news the various media listings in the Top Stories of 2017 genre. In the top social media stories category, we have been reminded of Obama’s poignant Twitter posting in the aftermath of the Charlottesville tragedy.

In that Twitter post, Obama quoted former South African president/activist Nelson Mandela: “No one is born hating another person because of the color of his skin or his background or his religion.” The Tweet is accompanied by a photo of Obama, suit jacket slung over his shoulder, smiling and greeting a group of children of different races at a window of a day-care center in Maryland.

Indelible symbolism, for sure.

Souza captured that photo of Obama and the children on June 9, 2011, but its message reverberated worldwide during the turbulent first year of Donald Trump in the White House. According to Twitter, it was the second-most retweeted posting of 2017 and the most “liked” post in Twitter history.

Souza, on this day at the Newseum, told us that photo was one of his favorites. In his encyclopedia-like book chock-full of vivid images, memories and reflections in 349 over-size pages, Souza gave the photo a page unto itself. No sharing.

Souza’s intersection with Obama began in January 2005. Obama was the young U.S. senator from Illinois; Souza was a Washington-based photographer for the Chicago Tribune. Tribune political writer Jeff Zeleny (now with CNN) asked Souza to take photos of the newly elected senator for a series of in-depth story packages.

That’s when Souza began his musings about the future. “I thought to myself,” Souza recalled, “could I be observing the future president of the United States?”

Later, when Obama indeed began his presidential run in 2007, Souza was there. However, that summer, he resigned from the Tribune to accept a position as a photojournalism professor at Ohio University. Souza still found time to occasionally photograph the then-senator and even published a book, “The Rise of Barack Obama.”

After Obama won the 2008 election, Souza received a call from Robert Gibbs, Obama’s press secretary at the time. Souza said he had one issue for Gibbs: “I remember telling him that in order to do the job, I needed to have access. Access to everything. All the important stuff, the moments when decisions are made. Even if it was classified.”

Souza related that Gibbs responded, “Of course, the president-elect gets it.”

Speaking of “all the important stuff,” most Americans remember May 1, 2011. That was the day of “Geronimo” — the U.S. military’s code name for Osama bin Laden. Turn to Page 130 in the book; you will see that iconic photo of Obama and his staff watching in real time the Navy SEALs’ raid that killed the international terrorist in Pakistan. The White House staff occupied a cramped conference room near the Situation Room.

Gen. Marshall “Brad” Webb sat in a high-back, dark-leather chair at the head of a table. He was operating a laptop computer that provided a communications linkup with the bin Laden mission.

A back-story of humility: Souza told us that when President Obama entered the room, Gen. Webb instinctively rose up from his chair, thinking, of course, in deference to the president that Obama wanted the head chair. However, Obama told the general to remain in the head chair, as the president relocated to a regular chair.

Would Donald Trump ask a general not to get up upon Trump’s entrance?

Souza’s disdain for Trump was obvious throughout his presentation, though he never mentioned Trump by name. At the beginning of his slide show, Souza blurted, “This is not fake news.” The Newseum audience roared with laughter and applause.

Souza, grandson of Azorean Portuguese immigrants to the United States, provided us with an astronomical number: He clicked 1.9 million photos during Obama’s eight-year tenure.

From all corners of the globe — from a rooftop restaurant in Moscow to the Holocaust Museum in Jerusalem to a fist-bump with a janitor in Washington to the Grand Canyon in Arizona to a discrete chat with Russian leader Vladimir Putin in Normandy, France, on the 70th anniversary of D-Day to the candid kid scenes at the White House and in Ohio.

Souza’s slide show induced Newseum audience members to audibly ooh and ahh in some cases, groan in others. Some photos provoked laughter, as others resulted in woos and wows.

Souza wistfully spoke of how he and Obama became close friends through their world travels. As Obama wrote in his foreword for Souza, “I probably spent more time with Pete Souza than with anybody other than my family … ”

Time at the intersection of photographer and president.