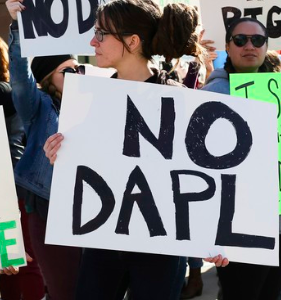 If you break the speed limit, you get a ticket. While you might not be happy you’re receiving a ticket, no rational person would dispute the logic behind that decision. On the other hand, pipeline protesters are breaking the law — vandalizing infrastructure and putting workers, law enforcement and community members at risk — and are surprised they are being held accountable for their actions.

To clarify: freedom of speech and the right to protest are critical rights protected under the U.S. Constitution. But a dangerous trend is rapidly developing in which activists have decided they can pick and choose which laws they would like to follow — with no regard to property rights, safety or the wellbeing of others.

Last month, federal prosecutors charged Dakota Access Pipeline vandals Jessica Reznicek and Ruby Montoya each with one count of conspiracy to damage an energy facility, four counts of use of fire in the commission of a felony, and four counts of malicious use of fire.

In a 2017 news conference, Montoya admitted they damaged the $3.8 billion pipeline, but alleged the two acted “out of necessity” because “(their) conclusion (was) that the system is broken and it is up to us as individuals to take peaceful action and remedy it.”

Ironically, despite claims that Dakota Access poses a threat to the environment and surrounding communities, the only real threat are the dangerous and unlawful vigilante tactics of protesters like Montoya and Reznicek. The pipeline has now been operational for more than two years, safely and efficiently transporting the energy that American consumers use and need every day.

Unfortunately, the actions of Montoya and Reznicek are not isolated. Protesters continue to employ risky, illegal tactics that put others in danger and come at taxpayer expense.

In Texas, law enforcement recently arrested climate protesters who tied up traffic and closed part of a key oil export waterway for 18 hours by tying themselves to a bridge and dangling over the water. Sheriff’s deputies had to rappel down to cut the ropes tying the protesters to each other and lower each individually to police boats.

In Pennsylvania, a disgruntled landowner set fires near equipment, harassed pipeline workers, and even lured bears to the Mariner East construction site as trees were being cleared on her property.

In Virginia, a fire earlier this year at a Mountain Valley Pipeline construction site caused $500,000 in damage to equipment. The county fire marshal’s office determined the fire was intentionally set, and is being investigated as arson.

There have been dozens more of recorded incidents of pipeline vandalism and unlawful protest over the last decade across the United States and Canada. But taking blowtorches to pipe, pouring sand into equipment engines, and lighting fire to work sites are not acceptable or effective methods of dissent.

Environmental activists must carefully consider the big picture. It is worth noting that protesters seemingly undermine their own argument by opposing American energy infrastructure development. Natural gas and petroleum products are responsible for producing the mainstay of American energy. Opposing the construction of modern pipelines will not minimize the country’s need for oil and gas. Rather, it will only increase the use of truck and rail for transport — both of which are less environmentally friendly, less safe and less efficient.