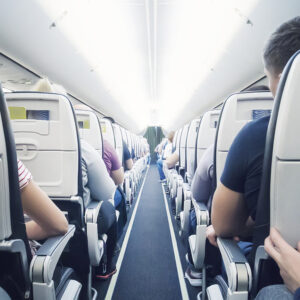 It’s been said that in the Southeastern United States, whether your soul is headed for Heaven or Hell, it will have to change planes in Charlotte or Atlanta. Thus is the notoriety of commercial aviation’s hub-and-spoke system. Regional flights often require you to fly through a hub—and it’s often faster to just go by automobile—and make it easier to just stay home. This may change with what we call “planepooling,” and the idea’s time may be fast approaching.

Planepooling is like carpooling in the sky. Uber’s app has offered a service called UberPool (mostly suspended during COVID). You hit the cellphone app, a car arrives, perhaps with another passenger already in the car when you get in. Perhaps he picks another passenger up along the way and, eventually, drops you off where you’re headed. It takes a bit longer than a regular Uber, but sharing your ride and relenting a few minutes on speed lowers your fare. Now, let’s adapt this idea to flying.

In a recent paper and an accompanying brief, we describe the “Nashville-to-Asheville Problem”: Suppose you live in the suburbs of Nashville. You need to go to Asheville, North Carolina, around 200 miles east of home, and have two options. First, you can fly via Atlanta—a 6-hour, 20-minute trip, over 4 hours of which are spent in cars or airports. Plus, there’s the stress of worrying that you’ll miss one of your two flights.

Alternatively, you can drive to Asheville in 4 hours, 21 minutes—2 hours fewer than flying. Of course, when driving, you can’t nap, read, work, or play games as you can when flying. So, in 2021, the non-hub traveler must ask an odd question: “Should I drive, or do I have time to fly?”

Enter planepooling. In the late 1990s, aviation pioneers Burt Rutan and Bruce Holmes suggested shifting part of commercial aviation to small airplanes (6-to-10 seaters) flying in and out of the hundreds of underused small airports in America. As with UberPool, our traveler taps his cellphone app, scheduling a plane to pick him up at the tiny Smyrna Airport near his home. Boarding is quick; the plane picks up passengers at two local airports in Tennessee and then flies on to Asheville. The trip takes almost exactly the time it would take to drive. The passenger never has to change planes and never worries about missed connections. If you luck out and catch a direct planepool from suburban Nashville to Asheville, the trip takes three hours less than a present-day flight.

When Rutan and Holmes proposed the idea, planepooling wasn’t feasible. Jet companies and charter plane companies have sold empty seats for years, but the process was largely manual, inconvenient, and expensive. Things have changed. Ridesharing technologies and efficient new planes (some electric and climate-friendly) will make planepooling less expensive. There are more (and wealthier) potential passengers in smaller places because of outmigration from large cities and the rise of telecommuting.

COVID-19 accelerated these trends. The technology is still in progress, and policymakers must act to make planepooling economical. Existing federal aviation subsidy programs need reassessment, and local authorities should urge state and federal leaders to take a permissive view towards new aviation technologies.

Planepooling would likely yield positive effects on smaller communities. Today, an urban dweller or big-city company wishing to move to, say, Rehoboth Beach, Dela., knows the nearest reliable airports (Philadelphia and Baltimore) are more than two hours away—with considerable risk of traffic delays. (For most of the past three decades, Delaware has been the only state with no scheduled airline flights.) No doubt, this immobility deters individuals and companies from moving to Rehoboth. With planepooling, travelers could arrive at and depart from Delaware Coastal Airport, 18 miles away—or perhaps from the smaller airstrips even closer.

This situation isn’t limited to Delaware. In thousands of smaller communities across America—perhaps especially in the wide spaces of the West—growth is stunted because air transportation is absent. The result can be depressed real estate prices and limited employment opportunities. Planepooling has the potential to change all of that.