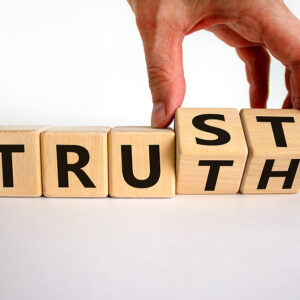 Playing Truth or Consequences in 2021

Years ago, there was a popular TV game show called “Truth or Consequences.” It required contestants to correctly answer questions or otherwise face a consequence—usually, a silly stunt, though sometimes producers surprised viewers with a tearful personal reunion like a soldier’s return home. Bob Barker, one of the show’s hosts, had a memorable sign-off: “Hoping all your consequences are happy ones.”

Given how much we doubt the presentation of “truth” in our current era, Barker’s sign-off got me thinking. For one thing, is truth still important to us, or is it a relic of the past? And for another, what are the consequences of our skepticism about what is told to us as “true?” “Happy” doesn’t seem to follow.

We have many data points to suggest we don’t trust what we see or hear. As relates to government, a 2020 Pew study reports that across party lines, only 20 percent of U.S. adults trust their elected officials. Hence the joke, “How do you know if a politician is lying?” Answer: “His lips are moving.”

And it’s not just in politics that we’ve become disbelievers. We used to trust our scientists. After all, science is steeped in research and facts. Today? Not so much. Again, Pew reports that in February 2020, only 51 percent of respondents hold a “fair amount” of confidence in scientists. COVID has likely further eroded that percentage.

So, by and large, we don’t trust the government and are cautious regarding scientists. How does social media fare? An MIT study reviewed 126,000 stories spread on Twitter, where the study’s reviewers characterized the stories as true or false based on six independent fact-checking organizations. What did the study’s co-author, Sinan Aral find? “Falsehoods travel farther, faster, deeper, and more broadly than the truth, in all categories of information, and in many cases by an order of magnitude.”

This probably helps to explain why only 35 percent of all adults trust the political news they get on social media (Pew, 2019). This sounds like another variation of the stale joke about the politician. How do we know if social media is lying? It’s sharing a story.

It’s one thing to feel a diminished sense of truth in the people and news sources around us. It’s another to consider how lying has impacted our own personal behavior. Here’s a seemingly innocuous example. How often do you use “gotta go” when trying to get off the phone when you actually don’t “gotta go?”  Usually, the sayer follows with a fake line, like “Gotta walk my dog.” I will fess up to using this myself.

Sometimes our lying has a humane aspect to it —what we often call a “white lie.” Maybe you’ve engaged with someone who has particularly struggled during COVID, and you say something like, “You look like you are holding up well,” when clearly they’re not. I’ve committed this one, too. The alternative of saying nothing and letting the silence hang or saying something truthful like, “Many people are choosing to go gray” does not seem any better.

There are, of course, the lies we tell that have no possible social redemption. Constructing a false online dating profile with a photo-shopped picture is an example. I am told some people even misrepresent their marital status.

There is the deceptive practice of “astroturfing,” where we cook up positive reviews of a product in large amounts to facilitate adoption, such as the case of fake book reviews.

All this lying—in so many forms and degrees—might make us feel like the ancient Greek philosopher Diogenes who is said to have lit a lamp in broad daylight as he went about looking for “a single honest man.”

Where will we find our single honest man? And what are the consequences are of living in a culture where being duped is assumed. Gone are the days where we did business on a handshake or said, “I give you my word,” and it was sufficient.

The consequences of lying are steep and may go as deep as a loss of self-esteem, disillusionment in our future, and more fragile relationships. Perhaps Mark Twain’s lighter but ever so true words can guide us, “If you tell the truth, you don’t have to remember anything.”