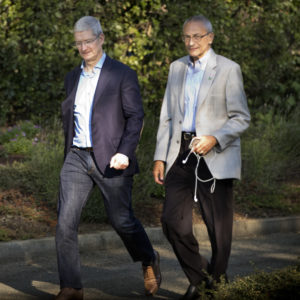 Apple CEO Tim Cook asked for a personal meeting with Democratic presidential nominee Hillary Clinton after she appeared to agree the government should withhold patents from large corporations until they pay taxes on money they keep offshore, emails leaked Thursday from Apple to Clinton Campaign Chairman John Podesta show.

The latest dump of emails hacked from Podesta and released by WikiLeaks include another from the campaign’s frequent Apple contact and former Obama EPA administrator Lisa Jackson, hours after Clinton signaled support for holding as “leverage” the patents of major corporations like Apple until they brings assests stored overseas back to the U.S. and pay taxes on them.

Jackson, Apple’s vice president of environmental policy and social initiatives, forwarded a news story from The Hill reporting the exchange Clinton had during a town hall in Sioux City, Iowa on Jan. 5.

“We have major corporations in this country — GE, Apple, many others — that are salting money away offshore,” someone from the audience told Clinton. “Can’t we use their patents as leverage to make them pay their taxes?”

The former secretary of state responded, “Yes, we can and we will.”

In her email to Podesta, Jackson offered to brief the campaign on the topic and said Cook could speak with either Podesta or Clinton about it.

“Hey there. Happy to brief folks up on this topic. Tim would love to speak to HRC or you as well,” Jackson wrote. The Apple VP included a link to a YouTube video in which the question and Clinton’s response can be heard clearly.

Podesta didn’t reply until the next day, saying Clinton couldn’t hear the question and that she was talking about corporate inversions — when a U.S. company merges with a foreign company and reestablishes itself overseas to avoid paying taxes in the U.S. He said the camapign had already provided the same explanation to The Wall Street Journal and CNN, and convinced them to abandon the story.

“We have been pushing back on reporters that she was talking about inversions and not patents,” Podesta wrote. “Didn’t hear the patent part of the question. She wasn’t announcing anything new and is not for patent suspensions. That has convinced WSJ and CNN not to pursue. Hope that helps and sorry for the dust up. Growing pains of bigger town halls where you can’t really hear the question.”

According to The Hill story from the previous day, that outlet also reached out to the campaign for details on Clinton’s stance but never heard back, indicating the camapign may have gone into damage control to strategize how to roll back a policy stance that would have been wildly unpopular with Clinton’s long list of Silicon Valley donors — something the campaign was forced to do repeatedly after other Clinton tech-flubs, more Podesta emails show.

Apple has come under increasing fire in recent years for storing assets abroard and avoding taxes in and outside of the U.S. The iPhone maker also has a reputation for weaponizing its patents in ongoing lawsuits with competitors like Samsung.

Earlier emails show the Silicon Valley giant offered to brief the Clinton camp on the encryption issue while FBI Director James Comey was in the midst of a campaign on Capitol Hill to convince lawmakers to step into the “going dark” debate, in which he advocated forcing Apple and others to come up with a workaround for letting law enforcment access encrypted communciations.

Other emails indicate Cook was on the short list of Clinton running mates before she named Virginia Democrat Sen. Tim Kaine.