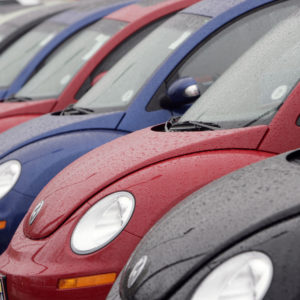 Several Supreme Court justices sounded sympathetic Tuesday to Samsung’s argument that Apple shouldn’t get the total profits from Galaxy smartphones for copying three ornamental iPhone patents, while others questioned whether the primary appeal of iconic cars like a VW Beetle or Corvette — the body — also applies to smartphones.

Lawyers for Apple and Samsung exchanged their most recent volley of legal blows before the nation’s highest court Tuesday, where Samsung’s Kathleen Sullivan argued the Galaxy maker shouldn’t have to pay Apple the total profit of smartphones an earlier court ruled infringe on three design patents for the iPhone’s rectangular, rounded-corner shape, surrounding bezel and grid of 16 app icons.

Samsung paid Apple $548.2 million last year for infringing on several patented iPhone features in its Galaxy S II, S III, Note and Note II handsets, but disputes another $399 million awarded by an earlier court based on a 120-year-old provision of the Patent Act, which states a party convicted of copying a design patent can be made to turn over the “entire profit” of an infringing product.

Sullivan argued that Samsung shouldn’t have to turn over its entire profit based on only several infringing features, and that the company is only liable for damages based on the value of those features — a position Chief Justice John Roberts appeared to agree with.

“Maybe I’m not grasping the difficulties in the case. It seems to me that the design is applied to the exterior case of the phone. It’s not applied to the — all the chips and wires,” Roberts said. “So there shouldn’t be profits awarded based on the entire price of the phone.”

Apple lawyer Seth Waxman said that while its true the patents in question don’t cover the innards or other features of the the phone, the law in question states the infringer is entitled to total profit disgorgement from the article of manufacture the design patent is applied to.

According to Waxman, Samsung neglected to make the argument in a lower court that the patent doesn’t apply to the entire smartphone, and as a result, argued the jury was correct in awarding Apple damages encompassing the total profit based on the instructions they were given.

Judges largely dismissed Waxman’s technical argument and instead hammered down what should define an article of manufacture, pressing both attorneys and an impartial representative from the Justice Department on how it should be interpreted with regard to contemporary products like smartphones, which can incorporate thousands of components and patents.

Justices repeatedly returned to the example of iconic automobiles, some doubting the body style and ornamentation of cars as the primary reason consumers buy them.

“Wallpaper, you get the whole thing,” Justice Stephen Breyer said. “A Rolls Royce thing on the hood? No, no, no. You don’t get all the profit from the car.”

Breyer said he agreed with a friend-of-the-court brief from the Internet Association “that the design where it’s been applied to only part … of a multicomponent product and does not drive demand for the entire product, the article of manufacture is rightly considered to be only the component to which the design applies. And only profit attributable to that component may be awarded.”

Justice Sonia Sotomayor disagreed, and said it was possible consumers purchased smartphones based primarily on the exterior.

“How do we announce the right test for that?” Sotomayor said. “Because the phone could be seen by a public — a purchasing consumer — as being just that rounded edge, slim outer shell. That might be what drives the sale.”

Justice Anthony Kennedy agreed, adding apportionment based on certain components could unfairly compensate a patent holder for additional development costs that went into creating a product.

“Suppose the Volkswagen Beetle design was done in three days, and it was a stroke of genius and it identified the car,” Kennedy posited. “Then it seems to me that that’s quite unfair to say, well, we give three days’ profit, but then it took 100,000 hours to develop the motor.”

He added neither side appeared to give the jury clear instruction in the lower court.

Sullivan said Samsung tried to raise the apportionment argument several times previously in the case, but was turned down repeatedly in district court. She said had the jury been given correct instruction it “could not have found for Apple.”

“Let’s take the Beetle, or let’s take a cool, shark-shaped exterior body on a car like the Corvette,” Sullivan said. “It may be that the article of manufacture to which the design patent is applied is just the exterior body of the car, but it may be that nobody really wants to pay much for the innards of the Corvette or the Beetle. They want to pay for the cool way it looks. If that’s so, it should be open to the patent-holder to prove that the bulk of the profits come from the exterior of the car.”

“Just because you can show that most of the profit comes from the Beetle exterior does not mean the car is the article of manufacture,” Sullivan continued, arguing any determination should go through a two-prong test to determine what the article is and how much it contributed to consumers’ decision to buy.

“Under your hypo[thesis],” Sullivan told Sotomayor, “If Apple got almost all its profits from the exterior case, people were indifferent to whether they could read their email, navigate, take photos, or any other functions.”

“This hypothetical is not helpful to me, because I can’t get over the thought that nobody buys a car, even a Beetle, just because they like the way it looks,” Alito said. “It cost, I think, $1,800 when it was first sold in the United States? What if it cost $18,000? What if it got 2 miles per gallon? What if it broke down every 50 miles?”

Justice Department lawyer Brian Fletcher, also speaking before the court, agreed the burden should be on Apple to prove the cosmetic features largely sold the phone, and suggested a decision could be better informed with input from expert witnesses and consumer surveys.

“I think the way to approach it would be identify the article and then let the patent-holder make the argument that even though the article may be just a part of the product sold — and here, maybe it’s just the case of the front face — really, that’s what sells it,” Fletcher said.

He added both sides appear to agree on the basic point that total profit disgorgement could be used to disproportionately reward patent holders.

Should the court decide Apple be awarded lesser damages, it will pass the case back down to a lower court to determine the amount.