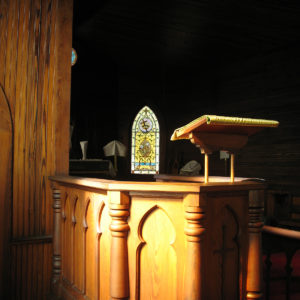 Point: In Defense of the Johnson Amendment

In recent weeks, President Donald Trump has turned his attention to overhauling the nation’s tax code. While the exact details of Trump’s plan are unclear, one potential topic for debate could be the Johnson Amendment, a 6-decade-old tax law that prohibits churches and other tax-exempt organizations from either endorsing or opposing political candidates.

Trump has repeatedly vowed to repeal the amendment, supposedly at the behest of his evangelical base. But nearly 90 percent of evangelical leaders polled by the National Association of Evangelicals say pastors should not endorse politicians from the pulpit.

Repealing the Johnson Amendment would severely undermine the core mission of houses of worship by thrusting them into the crosshairs of partisan politics. Worse, it would fundamentally alter the legal separation between politics and religion, and open another loophole for undisclosed donors to contribute to political campaigns.

In an era when American politics has become increasingly divisive, faith communities whose mission is rooted in unity and peace should not bring politics into sacred spaces. The overwhelming majority of Americans agree with this sentiment: Nearly eight out of 10 Americans say that it is inappropriate for pastors to endorse a candidate in church. Three-quarters of Americans say churches should steer clear of endorsements altogether.

Opponents often argue that the Johnson Amendment restricts free speech and infringes on faith leaders’ First Amendment rights. But the amendment isn’t about speech, it’s about tax-status. Under the Johnson Amendment, faith leaders can still say whatever they want in their professional capacity — they simply forfeit the right to be a tax-free entity when making political endorsements on behalf of their respective organization. The government does not have an obligation to subsidize the political activity of non-profit groups.

Moreover, the Johnson Amendment doesn’t prohibit religious groups from being political, only from being partisan. The amendment currently allows faith leaders and houses of worship to critique social, economic and political policies that affect their community. Faith leaders and individual congregants can also endorse or oppose candidates in their individual capacity.

However, without the protections outlined in the Johnson Amendment, faith leaders could face reprisals from politicians or wealthy donors, who may attempt to leverage their influence to coerce churches and faith leaders into endorsing or opposing a certain candidate.

Notably, the elimination of the Johnson Amendment could also create a loophole in campaign finance law. Because 501(c)(3) nonprofits aren’t required to disclose their donors, political donors could shift many of their political activities to charities such as churches to avoid campaign contribution disclosure laws. As the country continues to grapple with the influence of money in politics, it seems ill-advised to move in a direction that will further decrease transparency by allowing dark money to seep into the nation’s most sacred institutions through a back door in the tax code.

Critics of the Johnson Amendment are also quick to point out that the law has been violated without consequence, but this is hardly a convincing argument for repeal. When a police officer fails to cite a driver for running a stop sign, the reasonable response is not to eliminate all stop signs thereby jeopardizing public safety. Weak enforcement of the law doesn’t obviate the need for it. It means there should be increased funding to enforce the law in those rare instances when there is a violation.

We must not lose sight of the fundamental purpose of religious institutions; they are sacred places for prayer and worship. Their missions vary from caring for the poor to providing emotional and social support for those in need. They are safe spaces for the community to gather and to find commonality of purpose. They do not exist to provide political endorsements for candidates.

Many congregations are politically diverse; political endorsements would likely sow rancor and division within the faith community. Repealing the Johnson Amendment could taint the sanctity and purity of faith leaders’ messages, prompting congregants to wonder whether faith leaders’ teachings are based on religious texts and deeply held religious convictions, or whether they are motivated by a political benefactor. Even the appearance of outside influence could undermine faith leaders’ moral authority.

At a time when many faith communities are struggling with declining attendance and growing skepticism, especially among millennials, entanglements with politics could cast a troublesome shadow over the independence and integrity of religious institutions. The Johnson Amendment is critical for maintaining the institutional integrity of houses of worship. Repealing the amendment would politicize religious institutions and make them subject to political influence, deeply compromising their core mission.

LaShawn Y. Warren is vice president of the Faith and Progressive Policy Initiative at the Center for American Progress, where her work focuses on the intersection of faith, values, ethics, law and activism.