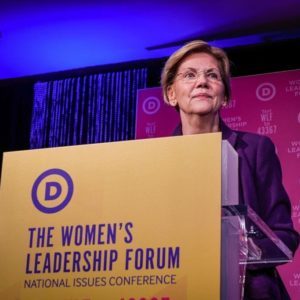 Editor’s Note: For another viewpoint, see Counterpoint: Sexism Didn’t Defeat Elizabeth Warren — but It Sure Tried

In her home state of Massachusetts, she finished third, 10 points behind Joe Biden.

And as disappointing as those numbers are, they’re an improvement over her performance in New Hampshire, where she finished fourth with just 10 percent support.

While many Warren supporters are certain the Massachusetts senator was the victim of sexism, others note that the liberal women in her own party chose other candidates over her — and not always men. In New Hampshire, for example, women with a college degree chose Minnesota Sen. Amy Klobuchar over Warren 29 percent to 12 percent.

“We live in a deeply sexist culture, and that misogyny is broadcast and reinforced through every cultural vector available,” wrote Elie Mystal in The Nation under the headline “Sexism Sank Elizabeth Warren.”

“I do think there’s a certain element of misogyny that is there,” Speaker Nancy Pelosi said after Warren dropped out.

“The American President, for the Foreseeable Future, Will Be a Man,” was the headline in the liberal Atlantic magazine. “That’s it. That’s the story.”

But is Warren’s gender really “the story”? Did it cause the collapse of a campaign that was atop the polls just weeks before the first primary — one that drew 20,000 to a rally at Washington Square Park in New York? Would candidate Edward Warren, a man with the same message and strategy, have succeeded where Warren failed?

“Call me a gender-traitor, but I think that maybe the reason Elizabeth Warren didn’t win the Democratic nomination is simply that Democratic voters had good reason to prefer someone else,” wrote Megan McArdle in the Washington Post, who adds: “Though women undoubtedly suffer discrimination for their gender, they also get some benefits, particularly in a Democratic primary.

“It’s hard to reconcile the notion that Warren’s sex was an issue among the same Democratic primary voters who made Hillary Clinton their nominee just four years ago. Are the voters of liberal enclaves like Massachusetts and New Hampshire really uncomfortable with female candidates?

New Hampshire is a particularly problematic example. Not only did Granite State Democrats pick Clinton over Barack Obama in 2008, but the state elected Democratic women governors for 10 consecutive years and had an all-woman congressional delegation until 2016. That’s when Rep. Carol Shea-Porter retired and was replaced by Chris Pappas — an openly gay man.

Still, some see sexism as the primary culprit and argue that while voters may support women candidates in general, the White House is still one step too far.

“It’s about the presidency,” said Teri Finneman, assistant professor of journalism at the University of Kansas and an expert in women in politics. “I think we continue to have an issue with sexism in this country, one we hoped had been overcome in the last election but still exists.”

Democratic consultant Lynda Tran at 270 Strategies agrees. “Women candidates face scrutiny over every last detail of what they present to the world at a scale and depth not similarly forced upon male candidates,” she said. “All of that bias finds its way into media coverage, media narrative, and even into the way that individuals treat women candidates because it has been socialized into our daily lives.”

The counterargument is that social science finds partisanship is far more important than sex in the minds of most Americans. “Today, the party divide is much wider than any demographic difference,” according to a recent Pew Research study.

That’s one reason Hillary Clinton won 3 million more votes than Donald Trump in 2016, and why the GOP talk-radio base — often accused of being anti-woman by critics — were wildly enthusiastic about Gov. Sarah Palin as a vice-presidential pick in 2008.

At the same time, Warren was one of the worst-performing incumbents in the 2018 election cycle and couldn’t win a single New England state as a presidential candidate.

Her poor performance among voters who know her best could be an indication that Warren’s problem isn’t being a woman but rather being Liz Warren.