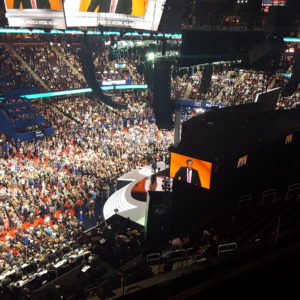 Point: Enough Made for TV; Make Political Conventions for the Voters

In America’s first century, when travel was arduous and news was mostly local, making decisions with people of other cities and states, and sharing the opinions of your neighbors back home, required a formal gathering of citizens from near and far.

It’s one reason behind the creation of the Electoral College, and why political parties began holding official conventions in the 1830s.

Nearly two centuries later, the Republican and Democratic parties still confirm their presidential nominees and solidify their platforms at conventions held during the summers before November presidential elections.

Now, the one-city, top-of-the-ticket focus is a choice, not a necessity, and the intended audience isn’t the party faithful in the arena. Instead, every video, graphic and speech is crafted for television, every soundbite drafted for Twitter.

As the coronavirus crisis continues, the Democratic Party is scaling this year’s Milwaukee-based event, including asking delegates to stay home. Officials in Jacksonville, Fla., the host city of President Donald Trump Republican extravaganza, announced safety precautions in light of the surge of COVID-19 cases.

The changes raise the question of if the traditional convention is the best use of time and money. The answer is no. The country is not served by conventions made for national television; we need a revamp made for voters.

A prime-time focus on the election isn’t the problem, though two days would be better than four. It’s the substance that needs updating.

We have a voting problem in America: not enough people do it. In 2016, turnout was just over 61 percent. For young people it was even lower — 46 percent — and Asian Americans and “LatinX” citizens consistently vote at disproportionately low rates as well. The effort and coverage dedicated to the conventions could be better used to increase voter turnout by informing citizens about the races on their ballot and educating on the electoral process.

“Am I registered? Where’s my polling place? What’s on my ballot?” These are the top questions from voters, Jeanette Senecal, the senior director for mission impact for the League of Women Voters, said in an interview for my book “Thank You for Voting.”

As it stands, one could watch entire conventions without knowing the answers to those questions. In their usual format, the conventions are a prolonged build up to the presidential candidate’s speech, ending with a giant balloon drop. Party leaders and television executives should keep the candidates’ speeches, whether from a basement or a swing state.

Hillary Clinton and Trump’s 2016 speeches were each watched by more than 33 million people; that many people hearing the candidates’ best sell is important.

But conventions should reflect a voter’s full ballot, not just the top. The pandemic made painfully clear the importance of who serves as mayor, governor, state legislators and members of Congress.

Instead of speeches by party stalwarts, propagandists pandering to the political fringes, or a celebrity talking to a chair, airtime the night before the presidential candidate’s address should shift to local stations so voters can hear the speeches, promises and platforms of down-ballot candidates, staged locally in front of their own potential voters.

A local focus also provides the opportunity to educate voters on local election processes to procedural questions. National non-partisan organizations, like Rock the Vote or I Am a Voter, can and should be featured for the widest audiences to help people learn where to register.

But also using local groups, like a League of Women Voters chapter, to inform on local rules and deadlines, including early voting options, is imperative.

State laws unfortunately vary widely, as many learned when navigating evolving vote-by-mail laws in an effort to vote safely in 2020 primary elections. (Making the programming a viewing draw remains important — a hometown celebrity can assist in the discussion about local voting issues.)

What would we lose with these changes? Conventions are known for introducing rising stars, like Barack Obama with his 2004 Democratic National Convention speech.

In this updated model, the young Obama could have spoken from Chicago to the people he was asking to send him to the Senate. The nation wouldn’t necessarily miss out — good speeches find their way to fame these days, and the parties could always play stand-out speeches from night one as warm-up acts on night two.

Using a national convention to educate voters on their full ballot would answer the questions voters are actually asking.

It’s a chance to empower citizens, increase voter turn-out, and still keep the balloons at the end.

Erin Geiger Smith is the author of “Thank You for Voting” (HarperCollins), and a young readers' edition of the same title. She wrote this for InsideSources.com.