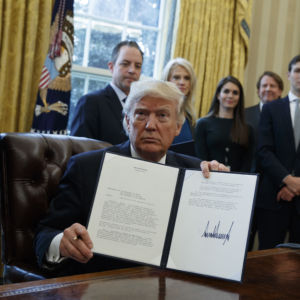 Editor’s Note: For an alternative viewpoint, please see: Counterpoint: Trump Follows Through on Promises, Paves the Way for Economic Growth

Confession: Many moons ago, I actually thought there was a little bit to like about Donald Trump.

During the primaries, he proved that GOP voters could care less about the party’s usual pro-business bromides. He smeared free-trade agreements as bad for workers, lamented that Wall Street traders were “getting away with murder” on their taxes, and won doing it.

Then, during the general election, he ridiculed both parties’ support for military misadventures like the Iraq War (though he lied freely about his own statements on it). And he asked oddly reasonable questions about whether preserving NATO was worth going to war with nuclear-armed Russia over, say, Estonia.

Granted, there was always more not to like — his flirtations with white nationalists, his casual sexism, his nonstop lying. But I did sometimes wonder: Is there any silver lining to all this?

The early days of the Trump administration suggest emphatically: No.

Let’s break it down, report-card style.

During his inaugural address, Trump promised that “every decision” he’d make would be “to benefit American workers and American families.”

To that end, he quickly pulled the United States out of the Trans-Pacific Partnership trade pact and ordered a “renegotiation” of NAFTA, which many people (quite reasonably) blame for hurting blue-collar U.S. workers — not that a trade war would help them either.

Interestingly, Trump also used his Twitter pulpit to bully companies into keeping jobs in the United States, though this was more sideshow than substance.

If all that was the good news, here’s the bad: Trump immediately issued orders to raise mortgage fees for working families and to rollback regulations designed to prevent another Wall Street crash.

“We expect to be cutting a lot” of those regulations, Trump told a business roundtable, because — no joke — banker “friends of mine” can’t get the loans they need. He added there was “nobody better” to get advice from on the subject than JPMorgan CEO Jamie Dimon. (That’s the same JPMorgan that got fined $13 billion for helping cause the crash.)

Moreover, the non-partisan Committee for a Responsible Budget estimates that Trump’s tax plan would add $11.5 trillion to the federal deficit — largely in tax cuts for super-rich people like those banker friends and Trump’s millionaire Cabinet nominees, just 17 of whom control more wealth than 43 million American households.

Oh, and one economist quoted by Forbes warned the deficits from those tax cuts could cost 11 million jobs. Sad!

During his campaign, Trump said he had a secret, “foolproof” plan to defeat ISIS. His “100 Days” agenda revealed what that was: Tell the Pentagon to come up with a plan to beat ISIS. Maybe he figured they hadn’t thought about it?

He then issued his infamous “Muslim ban,” which banned immigration from seven Muslim countries and cruelly suspended refugee resettlement from everywhere. No refugees from any of those banned countries have ever committed terrorism in the United States. But banned countries like Iraq — a partner in fighting ISIS — are now threatening to ban Americans, which may complicate Trump’s plans to “bomb the hell” out of the group.

And while Trump rightly questioned going to war with Russia over Eastern Europe, his newest National Security Council member — political adviser (and white nationalist) Steve Bannon — says “there’s no doubt” we’ll go to war with China over some disputed rocks in the ocean.

Virtually all climate scientists say the planet’s warming. Some even add that much of America’s eastern seaboard — including, say, Trump Tower — could be uninhabitable within the lifetime of kids born today.

To combat this challenge, which Trump famously called a “Chinese hoax,” he nominated an EPA head who’s spent more time suing the agency than supporting it and installed an oil CEO as his secretary of state. Automatic F.

Trump is now the fastest president to ever reach majority disapproval, so he’s probably not seen the last of his bad report cards. If there’s a silver lining after all, it’s that Americans will figure out they can make America great again themselves — by resisting his agenda, together.