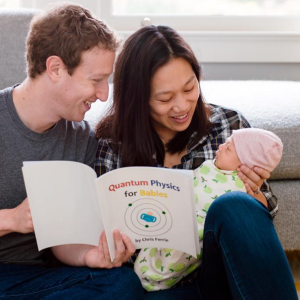 Mark Zuckerberg, Priscilla Chan, and their daughter, Max.
[IS] Opinions

In what has been heralded as the $45 billion birth announcement, Mark Zuckerberg and wife Priscilla Chan pledged 99 percent of their Facebook shares — valued at $45 billion today — to a new charitable venture in celebration of their daughter’s birth. Some mistaken observers see this as a bad thing.

Zuckerberg’s pledge should not come as a surprise. He has a history of using his vast wealth to support various causes, including nearly $2 billion in the past few years to support public education, health care and fighting Ebola, making him one of the most generous donors in America.

You would think that the creation of the Chan Zuckerberg Initiative — which will focus on “advancing human potential and promoting equality” — would warrant praise, which it certainly has received. Some have even said that it may end up being more important than Facebook (gasp!).

But others are uneasy, and even alarmed, because the Initiative is structured as a limited liability company (LLC) rather than a traditional nonprofit. This means it can invest in for-profit ventures, make political donations, lobby elected officials, and even make its own charitable contributions.

Some second-guessers on both the right and left are calling this nothing more than an elaborate tax dodge. By creating an LLC, however, Zuckerberg isn’t avoiding any taxes on his Facebook shares. He will still owe capital gains taxes on any that are sold. If and when the Initiative donates shares to a charitable organization, it will trigger a deduction — but he’d receive this tax break through a traditional nonprofit too.

In fact, if he were to create a traditional foundation, and then donate his shares over time, he’d likely be able to take greater advantage of the charitable deduction. There is no tax scheme here.

Regardless, much of the criticism appears based on Zuckerberg and Chan’s use of a for-profit initiative, and more broadly, on an underlying belief that government is in a better position to engage in charity than private enterprise. In this case, this includes government-regulated non-profit foundations, which must abide by certain restrictions to retain their tax-exempt status.

Why shouldn’t Zuckerberg be free to choose for himself? Plenty of billionaires commit their wealth to personal rather than charitable efforts. What if he spent his billions on a private island? A private jet? A yacht? What about committing his fortune to commercialize space travel? None of these pursuits draw the ire that has been directed at Zuckerberg’s pledge to commit his personal wealth to improving the world.

The real problem is that he plans to do it without any direct control by the rest of us. Jesse Eisinger recently wrote in the New York Times’ Dealbook that “Instead of lavishing praise on Mr. Zuckerberg … this should be an occasion to mull what kind of society we want to live in,” and that while Congress may not be great at allocating resources, society cannot rely on the “beneficence and enlightenment of the superwealthy.”

Alice Ollstein of ThinkProgess echoes this same sentiment. Although Congress may not be as prudent as Zuckerberg would be with his money, she argues, at least Congress is directly accountable while Zuckerberg is not.

So what would happen if we put Congress in control of Zuckerberg’s money?

If the past is any guide, Congress would redirect much of it toward other wealthy individuals. In fact, Zuckerberg’s $45 billion would not cover even half of the approximately $95 billion in tax subsidies that are given to the richest 1 percent of households each year.

It could even end up subsidizing other billionaires’ efforts to profit by commercializing space travel, or building high-end electric cars. These are interesting causes, but corporate welfare nonetheless, and a far cry from the charitable efforts the Chan Zuckerberg Initiative would likely focus on supporting.

In short, I put more faith in Zuckerberg’s ability to achieve his charitable goals with his own money than I do in Washington’s ability to do it for him. And, as it stands, individuals remain free to spend their wealth however they please.

Zuckerberg built his fortune by creating value for society in ways the rest of us never thought to. Why not trust him to spend that fortune in the same fashion?

Christopher Koopman is a research fellow with the Mercatus Center at George Mason University.