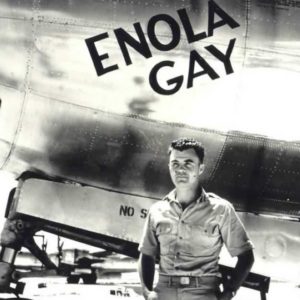 Col. Paul Tibbets in front of the Enola Gay.
[IS] Opinions

Point: On A-Bomb Question, U.S. and Japan Should Look Forward, Not Back

Editor’s Note: For another viewpoint, see Counterpoint: U.S. Should Apologize for Bombing Hiroshima and Nagasaki

August 6 and August 9 are the 75th anniversaries of the atomic bombings of Hiroshima and Nagasaki.

The decisions to drop those bombs have been questioned for three-quarters of a century and will be debated for years to come.

Some argue that the United States should issue a formal apology to Japan for the bombings (and for the firebombing of Tokyo and other tragedies of the war). But the best way to honor those killed in World War II is to avoid repeating the mistakes that led to its outbreak. American and Japanese leaders should focus on today’s challenges, not yesterday’s.

To be clear: there is no chance that President Trump will apologize for the dropping of the atomic bombs on Japan in 1945. Trump has famously urged his supporters, “Never apologize. Don’t ever apologize.”

To the extent that Trump looks to history, it is to justify a tougher line against Japan. After all, he reportedly told Prime Minister Shinzo Abe, “I remember Pearl Harbor.” Regardless of whether it would be wise, an apology from Trump simply is not in the cards.

But Trump is not alone in this view.

In 2016, then-President Barack Obama visited Hiroshima and spoke of the need to “mourn the dead” and “ponder a terrible force unleashed in a not-so-distant past.” Nevertheless, he did not apologize. Indeed, the White House expressly noted that it would not “revisit the decision to use the atomic bomb at the end of World War II.”

There’s good reason for this.

Jennifer Lind, a professor at Dartmouth who literally wrote the book on international apologies, argues “acknowledgement is vital, apologies are not.” She warns that apologies “can do more harm than good, because they often prompt an unproductive nationalist backlash.”

One need look no further than the fractured relationships in Northeast Asia to see the damage done by focusing on the problems of the past rather than those of the present.

The best way to honor those killed in World War II is to ensure we do not repeat the mistakes that led to that war. Divided democracies unprepared to confront spreading authoritarianism were a problem then as they are now. Today, China’s rise and North Korea’s continuing belligerence threaten both regional and global security.

Meanwhile, countries around the world are struggling to manage the human and economic crises wrought by the COVID-19 pandemic. The agenda for the alliance’s political leaders is therefore massive, even without wading into arguments best left to historians and philosophers.

John Hamre, a longtime supporter of U.S.-Japan relations, has often said that cars have a large windshield and small rearview mirrors because we are supposed to go forward, not backward. The same is true of the U.S.-Japan alliance.

So while the United States and Japan mourn the dead of World War II, they should also celebrate the alliance’s amazing accomplishments over the last 75 years. Founded in the ashes of a terrible tragedy, the alliance has become arguably the most important in the world.

It is home to the world’s first and third largest economies, in large part due to their shared success in bringing stability and prosperity to East Asia and beyond.

Building on this strong foundation requires an ambitious agenda. The United States and Japan should work together to highlight the benefits of liberal democracy and the dangers of authoritarianism. They should set the bar for high standards in trade while speaking up for human rights and freedoms.

The allies should rebuild their deterrence and defense postures while leading the development of new technologies and standards that protect privacy while enabling free expression. These are tall tasks, but the United States and Japan are up to them.

So yes, we should absolutely mourn those killed in World War II. Their deaths are tragedies that must not be repeated, whether they occurred in Hiroshima and Nagasaki or Pearl Harbor and Tokyo.

But the best way to remember those killed in World War II is to learn the lessons of that conflict and avoid making similar mistakes again. To the extent that politicians look backward, they should study the incredible story of the U.S.-Japan alliance and build on its accomplishments.

The mission for our political leaders is to learn from history, not be trapped by it.

Zack Cooper is a research fellow at the American Enterprise Institute and co-editor of Postwar Japan and Strategic Japan. He wrote this for InsideSources.com.