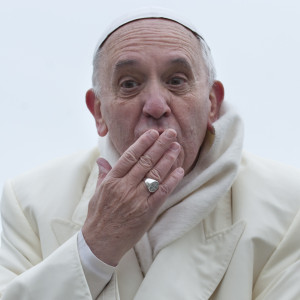 Point: Pope Francis and the Measure of Greatness

Editor’s Note: See here for an alternative view on the pope’s leadership: Counterpoint: Increasingly, Pope Francis Does Not Speak to Me.

What qualifies a pope to be considered great?

Well, within less than one year after his election, Pope Francis was named Time magazine’s “Person of the Year” and received top media coverage around the world. His @Pontifex accounts in nine languages on Twitter total more than 14 million followers, and a recent survey reported that he is more widely retweeted than any other world leader — meaning he beats them all in terms of reach and what social media experts call engagement. That should count as a measure of greatness.

But I suspect that when people think of Pope Francis, the first things that come to mind are images burned into memory because of their messages’ sheer power: Pope Francis washing and kissing the foot of a young Muslim woman in a detention center; Francis fully embracing a man with extreme deformities; Francis playfully placing a mischievous young boy on the papal chair, as a doting grandfather might.

With images such as these, Pope Francis teaches us and challenges us. At the center of his teaching and concern are the poor. Has anyone tried to count the times that Francis has specifically referenced the poor? Has he ever spoken about social or economic realities without his point of reference — how the poor are faring? Without a doubt, he holds each and every one of them in his heart.

I have lived now under seven popes. Each has brought his own unique gifts and style to the papal office. The last three have given us a dramatic contrast in what constitutes papal leadership.

Pope St. John Paul II was a charismatic leader who commanded a place on the world stage. He was able to touch the hearts of the youth of the world and was the first pope to attain “rock star” status as he filled stadiums with cheering faithful.

Pope Benedict XVI, on the other hand, is a man whose life has been anchored in academia. He is a theologian who taught us through scholarly encyclicals. He appears to be as much of an introvert as his predecessor was an extrovert.

And then there is Francis. His most powerful teaching is by his actions. He shows us what we are to do by giving us an example. He goes where no pope has gone before and bids us to follow him. It is here that we see his vision of a church and a world fully engaged in the messiness of life bringing the message of God’s mercy to where it is needed most: the brokenness of human life.

This is a personal responsibility, but Francis holds social and economic systems just as accountable.

A recurring theme for this pope is the responsibility of the economy to respond to the cries of the underprivileged who struggle to survive and of families to provide a future of hope and opportunity for their children. To this end, Pope Francis holds every economic system to the same standard: How are the poor among you faring?

But to stop there would be to miss a greater message. The overarching theme in Francis’ teaching is inclusion. Those deemed worthless or thrown away are held up as being of inestimable value. They are the poor. But they also are those who are mentally challenged, those who are physically disabled, those who are in need of forgiveness and reconciliation. Like the prophets of long ago, Pope Francis measures our society by how we treat the least among us.

It is probably good to point out that Pope Francis is not a politician. When he speaks and acts, he does so out of a prophetic tradition. In the Hebrew Scriptures, the prophets were agents who announced a vision of how God wished society to function. They gave us some of the most beautiful visions in the Bible of society and people living in harmony and accord. They also gave us some clear condemnations of ignoring the will of God, especially as it relates to the poor.

The true test of his impact will be on how much all that talk turns into action, on changing systems so that all people receive dignity and respect and opportunity. I believe he is changing the papacy and changing our world for the better. At the very least, he is the new patron saint of the poor and forgotten. And, to me, that is a sure measure of greatness.

The Rev. Larry Snyder is vice president for mission at the University of St. Thomas in Minnesota and former president of Catholic Charities USA.