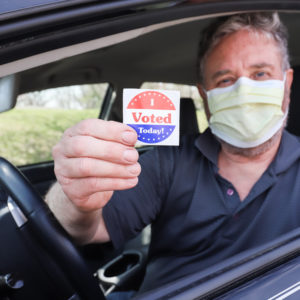 Point: The Freedom to Vote is Nonpartisan

For the third time this year, all 50 Senate Democrats voted to advance major voting rights legislation, and all Senate Republicans voted against allowing a public debate. On October 20, they blocked the Freedom to Vote Act, a bill with common-sense reforms and widespread support. It’s a compilation of tried-and-true solutions empowering voters in states — bipartisan reforms that help ensure our elected officials represent we the people, not secret special interests.

Today, many Americans are skeptical about who our elected officials are working for. Seven in 10 of us believe “the economy is rigged to advantage the rich and powerful” and “traditional parties and politicians don’t care about people like me.” Yet for three years, Senate Republicans have refused to allow even public debate on a bill to protect our freedom to vote and get big money out of politics. This marks a huge, and troubling, change. Since the earliest days of our country, government “by the people” has been something Americans agreed on — regardless of party.

The Voting Rights Act is a good example of how the work of “keeping our Republic” has historically crossed party boundaries. Each time it has been updated, a Republican president signed it into law:

—Richard Nixon signed an extension because “The Voting Rights Act of 1965 has opened participation in the political process.”

—Gerald Ford supported expanding the act because “the right to vote is at the very foundation of our American system, and nothing must interfere with this very precious right.”

—Ronald Reagan signed an extension because “I’ve pledged that as long as I’m in a position to uphold the Constitution, no barrier will come between our citizens and the voting booth.”

—And George W. Bush signed the most recent update (which passed the Senate 98-0) saying, “In the America promised by our Founders … every generation has a responsibility to add its own chapter to the unfolding story of freedom. … We’ve made progress toward equality, yet the work for a more perfect union is never ending.”

How is it that, today, Senate Republicans view protecting the freedom to vote as a partisan issue?

Getting big money out of politics helps ensure that our government works “for the people,” not for special interests. As with voting rights, that effort has historically crossed party lines. The Federal Election Campaign Act of 1971, legislation passed in 1974 to limit campaign donations and incentivize small donations for presidential elections, a 1976 law expanding disclosure of political donations, and the Bipartisan Campaign Reform Act of 2002 were all bipartisan and signed by Republican presidents. More important, these reforms weren’t just bipartisan — they advanced the nonpartisan interests of the people.

How is it that, today, Senate Republicans view protecting our government from special-interest influence as a partisan issue?

Gerrymandering — the scheme of designing legislative districts to give some voters more power and other voters less — has been scorned by leaders in both parties. “Gerrymandering has become a national scandal,” Reagan said in 1987.

How is it that, today, allowing voters to choose their elected officials — rather than enabling politicians to pick their voters — has become a partisan issue?

A large majority of voters — Democrats, Republicans, and independents — support reforms contained in the Freedom to Vote Act. In fact, when Americans get to vote directly on these reforms, they’ve largely approved them the last several years. Bold reforms to protect our voices and our freedom to vote like the Freedom to Vote Act, John Lewis Voting Rights Advancement Act, and D.C. statehood are supported by Republican voters, just not elected Republicans.

Senator Joe Manchin, D-W.Va., reached out to Senate Republicans to try to win support for his compromise voting rights bill. However, Democrats cannot throw up their hands and walk away because of continued Republican intransigence. The 14th and 15th amendments to the Constitution, which granted citizenship, voting rights, and equal protection of the law to formerly enslaved people, were passed on party-line votes, but no one would toss them aside on that basis.

It’s time for congressional Republicans to learn from the states, listen to the voters, and find their way back to the principle of a government “by the people.” Our generation has a responsibility to add our own chapter to the unfolding story of freedom. It’s beyond time for Senate Republicans to advance the Freedom to Vote Act. If they don’t, Senate Democrats must reform the filibuster to protect our sacred freedom to vote.