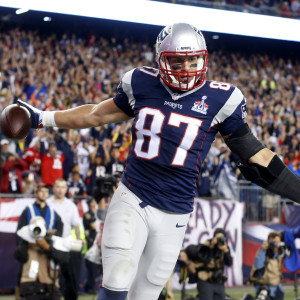 The NFL is akin to a runaway freight train. It’s the iron horse of pro sports: You cannot stop it; you can only hope to contain it.

Look at the numbers from last season.

If you thought pro football fans would turn away from the most recent Super Bowl in the wake of one off-the-field crime after another last season, you have to think again. The Super Bowl on Feb. 1, 2015, garnered an average audience of 114.4 million viewers. That’s the largest recorded U.S. television audience of all time.

Moral to the story: If you want a mega-audience, just wait for every first Sunday in February. While Major League Baseball is America’s pastime, the empire that is the NFL looms as America’s passion.

The weekly Las Vegas betting lines help fuel that passion, for sure.

And what about the all-important advertisers for NBC’s Super telecast? Key corporate sponsors, from McDonald’s to the crucial beer empires, such as Budweiser, ponied up $4.5 million per 30-second commercial. That dollar figure, of course, also is a record.

Note this statistical bonanza for the NFL and NBC was tallied after The Elevator Punch seen around the pro football world and beyond. Former Baltimore Ravens running back Ray Rice knocked out his then-fiancee Janay Palmer in an elevator in Atlantic City, N.J., on Feb. 15, 2014, that ultimately became the most infamous video probably in U.S. history; the video was released by TMZ to the public on Sept. 8, 2014.

Cringeworthy events — from domestic-violence confrontations to drug suspensions to dogfighting crimes to off-the-field player murder cases to child-abuse issues to deflated footballs to a fool named Cris Carter and his “fall guys” — dogged the NFL all of the 2014 season and the offseason.

However, the end result showed the NFL is still protected with an immovable coating of Teflon. During the Reagan administration, we had Teflon Ron; the NFL has Teflon all year long.

Shackled with public-relations nightmares that would have doomed most corporate entities, the NFL delivers like the post office — through rain and snow and tsunamis and earthquakes.

“Much like the gladiator games during the Roman Empire, the NFL has turned into such a giant spectacle and popular product that people simply can’t resist tuning in every Sunday (Thursday and Monday nights) to watch their beloved team/s,” said Chris Hurting, who knows something about public relations. He has been an account executive for the BMF public-relations firm in New Orleans for the last two years.

He added: “No matter what happens off the field, football is so ingrained in the American psyche that it is now simply too big to fail.”

The NFL’s main office this year even ceded its tax-exempt status, ostensibly to ward off congressional criticism.

So, observers can pontificate all they want on the supposed decline in popularity of the NFL, but where does it get them. Just the usual love from spectators and corporate sponsors alike. Check the figures for the last Super Bowl halftime show, featuring the dynamic Katy Perry. Perry’s starlit spectacle drew 118.5 million viewers, making Super Bowl XLIX the most-watched halftime show ever.

The NFL is an $11 billion enterprise, with sights on $25 billion by the 2027 season. Can anything derail this speeding locomotive from that 12-year goal? No way. Domestic violence, drugs, thugs and lugs, notwithstanding.

And off-the-field woes haven’t put a dent in the values of NFL franchises. According to Forbes business magazine, the Washington Redskins were the highest-valued NFL franchise in 2006 at $1.4 billion. In 2015, the Dallas Cowboys took the mantle at an eye-popping $3.2 billion.

This means the monetary worth of the NFL’s most valuable team has increased by $1.8 billion in nine years. Furthermore, a mediocre team such as the Buffalo Bills, located in a small market that’s closer to Canada than Manhattan, sold in 2014 for $1.4 billion, which would have been good enough for the top-value spot in 2006.

The defending Super Bowl champion New England Patriots more than doubled its value since 2006 — skyrocketing from a $1.18 billion worth to $2.6 billion in 2015.

And if you thought corporate sponsors were running from the NFL because of its epidemic of off-the-field problems and criminal issues, think a little while longer. Check out Mercedes-Benz.

The elite automaker soon will plant its imprimatur on not one but two NFL stadiums. Mercedes-Benz, according to the Sports Business Journal, will fork over an estimated $15 million per year as part of a 30-year deal for the naming rights to the Atlanta Falcons’ coming $1.5-billion stadium.

Mercedes-Benz already has a 10-year naming rights deal with the Superdome, the home stadium of the New Orleans Saints. According to the SBJ, that deal, consummated in 2011, is worth between $50 million and $60 million.

Think about this: These developments mean Mercedes-Benz will have its name and/or logo on half of the NFC South teams. And notice the naming-rights monetary rates increased substantially.

Even NFL fantasy leagues have mushroomed into a billion-dollar interest.

So, is the NFL ultimately too big to fail? You know it.