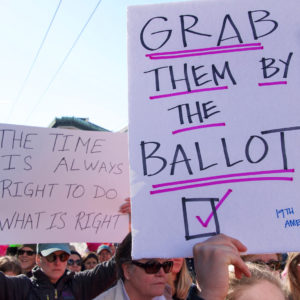 Point: Women Are Leading the Wave

Who runs the world?

Come on, we all know that answer, especially in this midterm cycle.

Women are leading from the front this election cycle and pulling the rest of politics with them. And that’s not just women candidates, but also women voters.

The midterms will see women candidates riding the wave into office in November, and there are plenty of historic firsts and achievements to be made.

This cycle alone, there are 18 women running for governor, 24 female Senate candidates, and 243 women running in House races, which is historic in and of itself. And who’s going to carry them across the finish line and into office?

In addition to the polling, women are leading the charge at home in their communities. They’re spearheading get-out-the vote efforts with local resistance groups. They’re powering the campaigns of women candidates as campaign managers and volunteers. And they’re fighting to get results in November.

Candidates like Ayanna Pressley and Alexandria Ocasio-Cortez who are challenging the old guard, which largely comprises older white men — and making space for themselves as activist candidates. These women are pushing the party beyond its comfort zone and offering diverse approaches and solutions along the way.

Candidates who are showcasing their humanity like Zephyr Teachout, a candidate for New York attorney general whose most recent ad features her receiving an ultrasound and emphasizes that “being a parent and being in power shouldn’t be in conflict for a woman any more than they are for a man.”

Candidates like M.J. Hager and Amy McGrath who take pride in their military service and toughness to act in difficult, dangerous situations and how that has led them to push for change and seek public office in the first place.

These women have thrown the rule book about what women candidates have to be like, look like and sound like out the window — and our political system should get ready for a jolt. Instead of “waiting in line” women, especially women of color, are stepping up, taking the reins, and forcing new debates about the problems facing all Americans.

Big or small, there will be a wave of historic outcomes this election cycle and the energy from voters can’t be ignored. Turnout in primaries has been off the charts (voter participation was up by more than 1 million in Florida’s recent primary compared to the 2014 midterm cycle, for example), Democratic candidates outraised Republicans in contested Senate races and outraised them by $44 million in 56 House races during second quarter, and 65 Republican-held seats are now rated as competitive.

No matter what, Congress is going to look a lot different come November.

Juanita Tolliver is the campaign director for the Center for American Progress Action Fund.