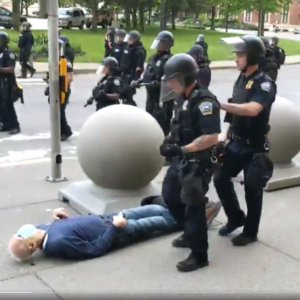 In the aftermath of the George Floyd killing, we as a nation need to ask — and answer — this question: How are we going to hold accountable rogue police in such a way that we have no more Officer Derek Chauvins — and no more of the dead civilians he and officers like him seem to leave in their wakes?

These include things like delayed interviews of officers involved in shootings — in some cases up to 10 days; officers provided all of the evidence against them prior to investigation; limited consideration of an officer’s disciplinary history — or its complete erasure, police-friendly statutes of limitations on misconduct charges; and prohibition on anonymous complaints.

Union contracts also often stipulate that only one officer at a time may interrogate a fellow officer — eliminating the effective “good cop, bad cop” method.

Combine that with required frequent breaks during questioning and interrogations conducted during office hours only, and you have a system pretty much designed to ensure rogue policemen escape justice.

No wonder, then, officers are rarely convicted for violent crimes, including homicide. From 2004 to 2017, for example, about 13,000 people were killed by police.

Even if we assume that criminal prosecution would not have been justified in every case, it is still astonishing that only one officer was convicted of intentional murder during this period.

Nor are prosecutors more likely to succeed when they seek civil-law penalties. Police officers almost never pay out of pocket for civil judgments made against them.

Even the firing of rogue policemen is difficult because, with alarming frequency, they successfully appeal termination — just under half the time (46 percent) for example in, of all places, Minnesota. Union-manipulated arbitration rules are often the problem here. Incredibly, arbitrators in Chicago reverse management’s decision exactly half the time.

How can something like that happen? Well, 87 of the largest 178 American police departments operate under police union contracts that eliminate adverse elements from an officer’s record as soon as two years after an event — misleading arbitrators to believe that an officer, again accused of law-breaking, has a cleaner background than he does.

So, what can be done? Civilian review boards? We have 100 of those — but they have been effectively sidelined by police unions. In jurisdictions where they can even be compelled to testify, police often face boards allowed to review only investigations performed by the internal-affairs departments — out of which come recommendations, not disciplinary measures.

The Minnesota Police Officer Bill of Rights permits civilian review boards, for instance, to make recommendations regarding complaints, and in Minneapolis those recommendations are all but ignored.

Another method of holding officers accountable: decertifying those shown to be capable of misconduct. The 45 state-level boards that certify can also decertify officers — but 20 states require a criminal conviction first. In other states, one’s firing, or resigning instead, would suffice — but those things, too, hardly ever happen.

Finally, we should immediately end “qualified immunity.” Created in 1967 by the U.S. Supreme Court, this doctrine shields police accused of disregard for constitutional law and harm to innocent people.

The fact is, the protections afforded members of police unions cannot be eliminated without their consent. But why would unions give it? In exchange for relatively low pay, they guarantee their members shielded employment — for life.

Asked what it would take for him to agree to the Chicago Police Accountability Task Force’s recommendation to remove such protections, Fraternal Order of Police President Dean Angelo Sr. had one reply: “Bring the checkbook.”

That, however, may be the opening to drive some real change.

But do taxpayers, who hold the purse strings, now have the courage to defy the unions and insist on well-overdue police reforms?

Tate Fegley is a research fellow at the Independent Institute, a postdoctoral associate at the Center for Governance and Markets at the University of Pittsburgh, and the author of “Police Unions and Officer Privileges” in The Independent Review. He wrote this for InsideSources.com.