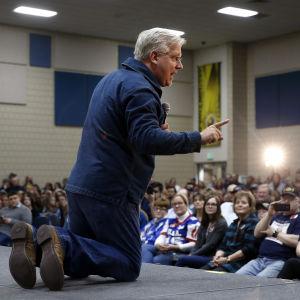 The Glenn Beck Effect: Why Radio Still Shapes Elections in 2016

When a focus group of South Carolina voters on MSNBC Thursday was asked where they heard positive information about Sen. Ted Cruz, R-Texas, two women were ready with the same answer.

“The Glenn Beck show on the radio,” the first said.

The second chimed in that the conservative broadcaster was a strong supporter of Cruz’s presidential campaign. “I’ve listened to him for years, and I trust his opinion,” she added.

These focus group participants illustrate something the radio industry knows well: the oldest broadcast medium, far from outdated, remains a powerful tool to influence elections. In fact, it may be undervalued at a time when so much attention is paid to newer platforms like social media.

The first of radio’s unique advantages is the trust longtime listeners place in their favorite on-air personalities, some of whom, like Beck, are willing to endorse political candidates. Vouching for office-seekers is rarer on television, and viewers tend not to have the same intimate personal connections with broadcasters on screen. Radio is more authentic, and a majority of people surveyed by Vox Populi Polling in 2014 even found radio ads more believable than other kinds of commercials.

None of this is lost on radio industry bigwigs. Many of them made these very points during a Feb. 3 networking seminar at the tony Columbus Club in Washington’s Union Station.

Though hardly impartial observers, they came armed with facts and figures, hoping to convince political consultants that their campaigns can still be won on the airwaves.

“Given the numerous communication options that are available today, radio still have the highest reach of registered voters,” said Erica Farber, president of the Radio Advertising Bureau. “It is a reach higher than that of broadcast and cable television, and it’s higher than social media options such as Facebook and Twitter, and even certain audio options such as Pandora or Spotify.”

Farber said radio, more than television, allows campaigns to closely target slices of the electorate they wish to reach, and the medium is particularly effective for connecting with black and Hispanic voters. This is evidenced by deliberate decision-making on casting for voice-overs, according to University of Missouri-Columbia political science professor Marvin Overby.

“On almost all television ads, the messenger is a white, middle-class person,” Overby told Time Magazine. “When you get on radio ads, especially for Democrats, they’re more likely to be ads that are not just targeted to African-Americans but feature African-American voices.”

According to presenters at the Feb. 3 seminar, radio reaches 220 million Americans of voting age each week. It’s still popular among those 18-34, and remains the best way for advertisers to reach people during the daylight hours.

Consumer research company Nielsen Audio also has a new tool for enable campaigns to take advantage of big data — a special targeting system that links radio habits to political preferences and partisan affiliations. The product has already produced some surprising and potentially useful findings, including that “ultra conservatives” tend to listen to classic rock.

Another advantage of radio advertising is its price tag. Patrick McGee, senior vice president of political strategies for the Katz Radio Group, called radio the most cost-efficient medium for campaign commercials.

In an interview with InsideSources, Farber explained why. “You can change copy quickly,” she said. “You can get on the air quickly. Think about the cost of producing television spots. That can be very expensive, so radio offers a flexibility that you may not necessarily have in a visual medium.”

In other words, it’s not just Glenn Beck. In an age of media disruption, there are a multitude of reasons why radio’s value to American politics remains intact.