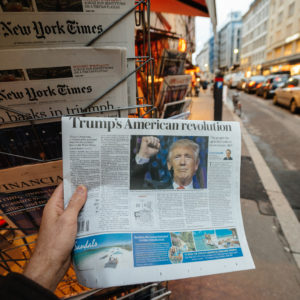 How Political Reporters and the Public Have a ‘Disconnect’ On Democracy

It’s no secret that there is a feud growing between President Donald Trump and the political reporters who cover him, but there’s also a number of citizens who completely distrust the media too. A recent study concludes that political journalists and Americans have opposing views of democracy, which might contribute to a “disconnect” between Americans and the media.

Tim Vos, an associate professor of journalism studies at the University of Missouri, and former doctoral student David Wolfgang, conducted in-depth interviews with political journalists across the country. The study identified a lack of diversity among journalists’ sources as a potential cause for the disconnect between the media and the public.

One of the basic standards of good journalism is gathering diverse viewpoints and covering all sides of an issue, which the political reporters interviewed for the study agreed was important to them. Yet, Vos found that a lack of newsroom resources, quick deadlines, and a lack of time to reflect on articles often prevents reporters from covering issues as fully as they’d like.

This conclusion isn’t necessarily new. It’s been well-documented that due to budget cuts, staff layoffs, the rise of social media, and a constantly changing media landscape, journalists are under a lot of pressure to post a story first, get the exclusive interview with a high-profile public figure, and generate traffic for their media outlet.

“But the changing nature of online publishing has forced some political journalists to adapt by publishing stories with fewer than the ideal number of diverse sources,” the study found. “One newspaper reporter admits he will publish stories online with just one source or viewpoint and then update the story later, once he receives information from other sources.”

With reporters focusing on efficiency rather than a diversity of views, they end up only reaching out to the decision makers who have the ability to enact political change. This is where Vos found an interesting theme emerge in his data. By focusing on the “elite” sources, he saw that political journalists had a different view on democracy, which could also add to the disconnect between the media and the public.

“Ultimately, political viewpoint diversity is constructed through the journalists’ assumptions about democracy,” according to the study. “When the political reporters talk about their jobs, they invoke assumptions about the role of journalism in democracy and about the nature of democracy. All the journalists interviewed talk, in some version or another, about providing audiences with news that will keep them informed about policies and politicians. But, this relationship between journalism and democracy is anchored in competing versions of democracy.”

Most reporters Vos interviewed had an “elitist” view of democracy, meaning American citizens should elect political candidates during elections and then allow those politicians to perform their jobs with little input from the public. Their role in the process is to update the public on the actions of the elected officials, so the public can be well-informed during the next election cycle, according to the study.

“By and large, the political reporters really defined a form of democracy that aligns with how political reporters operate,” Vos told InsideSources. “You are trying to interview sources who are close to the decision-making process and have a say on public policy. It’s focused on that small subset of political actors and their ideas.”

This philosophy, also known as “administrative democracy,” is at odds with the more populist view of democracy that many Americans hold, which states that the public should have influence over elected officials’ decisions on a more regular basis.

“Political reporters see their role as to monitor those who have power and monitor if they are competent or incompetent, or corrupt or not corrupt,” Vos said. “If [journalists] expose a corruptive act, then that’s where the public is supposed to react and vote them out of office.”

He said he found these competing views of democracy often in the 2016 presidential election, especially with the Access Hollywood tapes released in October, which revealed Trump making lewd remarks about women with Billy Bush.

“When reporters descended on the Billy Bush tapes or other controversies related to Trump, they thought they found this disqualifying fact, that Trump is not qualified for office, and then they expected the public to vote accordingly,” he said. “That’s an idealized version of how the public, press, and democracy didn’t work together. Trump certainly proved that it wasn’t that simple. That still explains the press’s confusion of what happened. They thought they were doing their job and something would come of it, but it didn’t.”

For several members of the media, after Trump’s victory in November, they admitted that they dropped the ball on seeing and covering the rise of Trump and Democratic presidential candidate Bernie Sanders. The two “outside” candidates were talking about issues that resonated with people outside the Beltway and some reporters said they didn’t do their due diligence when it came to listening to the people of Middle America.

New York Times columnist David Brooks said he had to do better to understand the American psyche.

“For me, it’s a lesson that I have to change the way I do my job if I’m going to report accurately on this country,” he wrote.

Even though reporters said they needed to change their approach to their job, it can be argued that it’s back to business as usual, at least according to Vos’s research, where the media stopped listening to the public and focused solely on the elites in Washington.

Take the controversy with Attorney General Jeff Sessions, which is currently playing out in the media. He has been accused that he misled Congress by failing to disclose pre-election meetings with Russia’s ambassador to the United States.

“The coverage so far has been insider perspective, with reporters focusing on what is the political norm or if some sort of legal barrier has been broken or crossed,” Vos said. “They’ll stay with the story until there’s a resolution, but there hasn’t really been any explanation of what this is all about. What’s really at stake here, why would this be disqualifying information. That part requires much more engagement with the public, with their understanding of what’s at stake here, and if they care about it.”

There are many factors that could have led to those results, including incorrectly predicting the presidential election, bias in reporting, and the rise of “fake news,” but Vos suggests there are ways political reporters can reverse the trend.

“Whenever [reporters] can get outside the bubble of those who are already in decision making positions, I think it’s a good idea to do so and to listen for ideas that aren’t being pushed by the major political parties,” he said. “[Ideas] might not be from a well-known national figure, but sometimes interesting perspectives and important facts come from unsuspecting places. If journalists are simply focused on the elite forces, they are going to hear the same thing over and over again, and it might not be what the public cares about.”