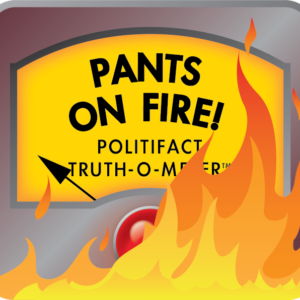 RNC: PolitiFact Has A History Of Anti-Right Bias

Heading into the first presidential debate as so-called fact-checkers prepare to parse the candidates’ words, some are worried about the potential partisanship of these media sources. One of the most-cited fact-checkers, PolitiFact, has a history of showing anti-right bias in its supposedly nonpartisan fact-checking, according to the Republican National Committee.

Republicans believe the fact-checker has shown a clear left-leaning bias. There are a number of cases where it would appear they scrutinized claims from the right much more than from the left. RNC Research Director Raj Shah notes the imbalance seems to always work against Republicans.

“Things that are not literally true are rated ‘correct’ because there was a kernel of truth. That’s not fact-checking, that’s opining,” Shah told InsideSources. “It seems as though whenever you find these inconsistencies they work against Republican favor.”

“We’re not just validating numbers,” PolitiFact Executive Director Aaron Sharockman told InsideSources. “We’re trying to provide context and look at the broader picture of how people will interpret that.”

PolitiFact has cited a number of Republican claims to be inaccurate simply because they lack context. Sharockman notes the rating system isn’t purely based on the literal data but also the message itself. PolitiFact will take into account whether a person is making a misleading statement even if the data is correct.

PolitiFact recently found itself at odds with the RNC over youth unemployment in the black community. The RNC claimed Sept. 17 that unemployment among black youth is up under President Barack Obama. Democratic Sen. Sanders used the same study to claim two months prior that young blacks are struggling more than whites. PolitiFact rated the Republican claim mostly false while validating Sanders.

“Standard statistics show that black youth unemployment has declined by one-third or more since 2009 when Obama took office,” PolitiFact wrote when critiquing the RNC. “The statement contains an element of truth but ignores critical facts that would give a different impression, so we rate it Mostly False.”

Both the RNC and Sanders based their claims on a study from the left-leaning Economic Policy Institute (EPI). Republicans cited unemployment while Sanders discussed both unemployment and underemployment. PolitiFact claims Republicans cherry-picked and misinterpreted old research.

The unemployment rate tracks the people not working while underemployment tracks those working below their skill set including those not working. EPI Media Relations Director Dan Crawford notes the two sets of data are distinctly different and that Republicans didn’t make that clear.

“Our figure wasn’t looking at overall black youth unemployment,” Crawford told InsideSources. “They’re misinterpreting it, or at least they could have been more specific.”

The EPI study found underemployment for young black college graduates went from 14.7  percent in December 2008 to 23.0 percent in March 2015. It remained below 20 percent in the years leading up to 2009. The study makes few references to unemployment.

“We take the actual words very seriously,” Sharockman noted. “In this case the RNC said unemployment, that is not what the statistic they sent us shows.”

Additionally, Republican Rep. Mike Pence was rated mostly false July 14 for saying more people in Indiana are working than ever before. Sharockman notes the claim might be true but that it was misleading. Pence made it appear as though his party was the reason employment is higher while ignoring population growth.

“We are not just calculators, we don’t just deal in absolute truth,” Sharockman stated. “We measured it as a share of employed as a percentage of the population and found it wasn’t the highest. So in raw numbers of course it is, but the fact is in five years it will be a new record because Indiana will grow in population.”

The RNC also took issue with the fact-checker August 30 in a blog entry posted on its website. Republicans claimed then-Sen. Hillary Clinton voted to raise taxes on individuals making $41,500 back in 2008. PolitiFact Florida rated the claim mostly false because the vote was on a nonbinding budget resolution.

“Budget resolutions lay out clear policy priorities and set spending and tax assumptions about revenue for congressional appropriators,” the RNC blog entry detailed. “We’ve seen votes on them in attack ads for years.”