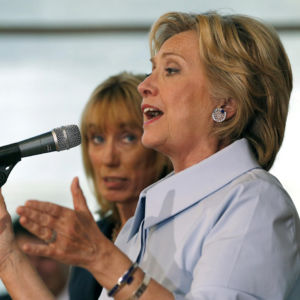 With just over a week to go until Election Day, a new InsideSources-NH Journal Poll shows the presidential, U.S. Senate, and gubernatorial races in New Hampshire have Republicans slightly leading, but each race is in a statistical dead heat. All eyes will be on the Granite State next Tuesday as it will be one of the first critical swing states to have polls close and report results that could end any suspense over who will win the presidential race and determine which party will control the U.S. Senate.

In the poll conducted October 26-28, Republican presidential nominee Donald Trump has a 1.7 point advantage over former U.S. Sec. of State Hillary Clinton, with 42.9 percent favoring her versus 44.6 percent for her Republican opponent in a five-way race. Among the third-party candidates, Libertarian Gary Johnson received 4.4 percent support, Green presidential hopeful Jill Stein was at 1.8 percent, and independent Evan McMullin was at 0.9 percent. The poll found 2.1 percent support for other candidates, and 3.5 percent are undecided.

Incumbent U.S. Sen. Kelly Ayotte performs better than her party’s presidential nominee in her reelection race against Democratic Gov. Maggie Hassan. Ayotte, who has said she will not vote for Trump as a result of his statements about women and other controversial positions, leads her Democratic rival by 2.1 percent, with Ayotte receiving 49.1 percent of the vote to Hassan’s 47 and 3.9 percent undecided.

InsideSources and NH Journal tested some of the messages that voters are hearing in the race for Senate. While extensive media coverage of the Senate race has focused on Ayotte’s disagreements with Trump, this appears to be having little effect on voters. A majority of Republicans say this makes no difference to their decision in the Senate race, and for voters who say it does make a difference, there is close to an even split on whether this makes them more or less likely to back Ayotte.

Respondents were also told Ayotte has been criticized by groups tied to the libertarian billionaire Koch Brothers and has broken with the Republican Party on several issues, including climate change, women’s healthcare, and gay rights. Perhaps surprisingly, Hassan’s supporters said this information made them less likely to back the Republican candidate even though her views align with Democrats on several hotly-debated issues.

While Ayotte’s disagreements with Trump appear to be having a minimal effect on the race for Senate, perhaps the issue that could ultimately determine the election is the decision by Hassan to tie herself closely to the top of the Democratic ticket. Hassan has repeatedly said she believes Clinton is honest and trustworthy, and the Democratic Senate candidate is a strong supporter of policy proposals put forward by Clinton. With the national race favoring Clinton, New Hampshire voters seem to be interested in electing a Senator who could serve as a check on a Democratic president.

Perhaps most troubling for the Hassan campaign, the InsideSources-NH Journal poll was taken immediately prior to the announcement by Federal Bureau of Investigation Director James Comey that the agency was reopening its criminal investigation into Hillary Clinton following the discovery of a new cache of emails that had not been turned over to the bureau. National polling suggests the latest news in the Clinton email scandal makes around one third of voters less likely to support Clinton. Hassan reaffirmed her support for Clinton after the FBI’s announcement.

The study also asked voters for their preferences in New Hampshire’s three-way race for Governor, between Republican Chris Sununu, Democrat Colin Van Ostern, and Libertarian candidate Max Abramson. Sununu held a lead over his opponents, with 45.2 percent versus 41.8 and 2.3 percent respectively, with 10.8 percent undecided.

“These results confirm what people are feeling on the ground: that really anyone can win,” said a Republican operative based in New Hampshire. “Whether it’s Ayotte or Hassan, Trump or Clinton, results in New Hampshire could mean the difference in who controls the Senate and the White House. With just about a week to go, turnout will be critical.”

The InsideSources-NH Journal survey was conducted via landline phones from a random sample of 408 likely voters in New Hampshire and has a margin of error of +/- 5.1 percent.